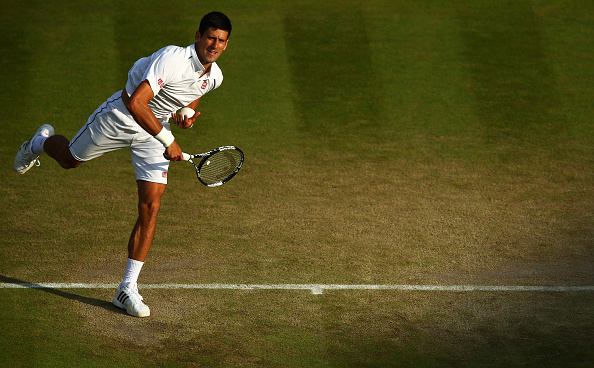 World no.1 and defending champion Novak Djokovic lost the first two sets 6-7 (8), 6-7 (8) on tie-breaks before fighting back to win the next three 6-1, 6-4, 7-5 against 14th-seeded Kevin Anderson in their fourth round match at Wimbledon.

After falling behind two sets to love, Novak found strength and energy to raise his game and take the third set in 24 minutes.

The Serbian top seed carried the momentum into the fourth set and broke the South African in the third game before serving it out 6-4 as the clock passed the three hours mark.

Play was then suspended due to poor light. The pair resumed the clash on Tuesday afternoon. Games went with serve till the 11th game of the deciding fifth set, when Djokovic made a crucial break. He sealed the win to set up a quarter-final meeting with no.9 seed Marin Cilic of Croatia (12-0 H2H record).

“I think Kevin served exceptionally well. I found it one of the most difficult matches I’ve played,” Novak said. “At times I was really helpless with my returns. He was very aggressive. I was two sets down. To come back and win in five gives me great satisfaction and confidence for the next challenge.”

Nole has reached quarter-finals or better at the All England Club every year since 2008.