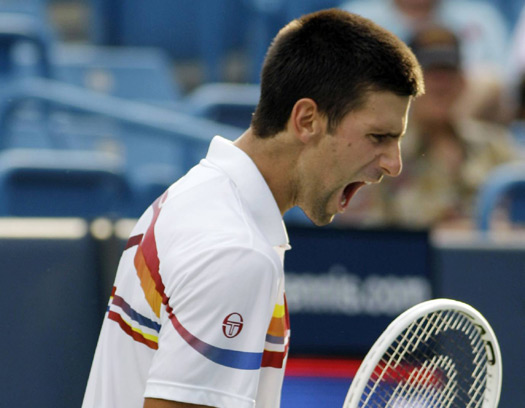 The world no.1 is through to the Western & Southern Open semi-finals!

Novak came back from a set down to defeat no.6 seed Frenchman Gael Monfils 3-6, 6-4, 6-3 in 2 hours and 33 minutes on centre court on Friday evening in a rematch of their quarter-final from Montreal last week.

Djokovic won that one 6-2, 6-1, but Monfils was a much tougher competitor today and Nole needed to put more effort to book his place in the last four at the ATP World Tour Masters 1000 event.

Monfils claimed the first set in 48 minutes. Novak made many unforced errors which is unusual for his game this year. The Frenchman converted 2 out of 2 break points, while the top seed failed to convert any of his five chances for break, which made the difference.

Nole brought the best out of him in the second set. Monfils played really well until the ninth game, but the Serb then made a crucial break and held serving for the set to take it 6-4 in 59 minutes.

The Paris native could not recover from there. Novak took the momentum into the decisive final set and made a break in the first game. He broke his opponent’s serve again in the ninth game and earned the victory.

“I had my chances in the first set, didn’t use them,” said Nole. “But in the middle of the second set, I started playing better. Stepped in when I needed to. It was a very physical match in the end. He struggled I think more physically. But I hung in there, and in the end it was a good win.”

He will play against no.8 seed Tomas Berdych in attempt to reach the Cincinnati finals.

“It’s a very fast court where he plays really well this tournament. He won today against Federer quite comfortably. He was hitting the ball extremely well. He will be aggressive, I’m sure, but it’s another big match.”