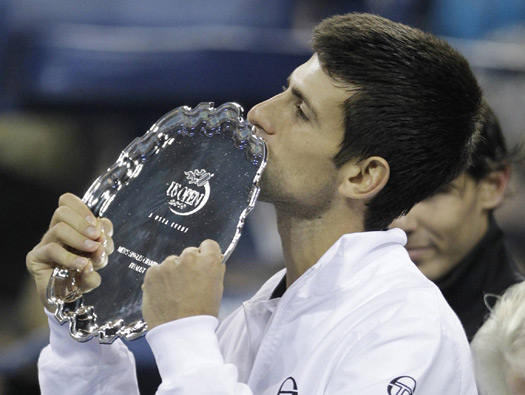 We have witnessed another great match between the world’s best tennis players, Rafael Nadal and Novak Djokovic. A memorable US Open finals. Nadal showed why he’s the best player in the world, and Novak put up a fantastic fight and played a very good match.

“It’s a great honour to be here again after three years. I would like first to congratulate Rafa and his team for amazing tournament. Right now he’s the best player in the world and he absolutely deserves this title, well done again,” said Nole at the trophy ceremony.

The Spaniard also had nice words for Novak. “Congratulations Nole and his team for a great tournament, because you’re a great player and you’re gonna win this trophy very soon for sure, I’m sure of that. I want to congratulate you Nole on the great attitude in a difficult moment after losing a Grand Slam final. That’s not an easy moment but congratulation because you have a great attitude and that’s a great example for the kids,” said Rafa to Novak followed by ovations.

Novak won’t have much time to rest after US Open final, he’ll be heading to Belgrade for next weekend’s Davis Cup World Group semi-final match against Czech Republic.

“I cannot hide the disappointment. It’s just I’m not gonna cry or complain about that, you know. It’s just the way it is. Of course, I am feeling bad about my loss. I wanted that trophy, and I know I gave my maximum to get it even tonight. But, you know, when I sleep over the night, tomorrow I will wake up as a new man. You know, I will continue on working hard and waiting for the next chance to come. Davis Cup semi-final tie is in a few days and it’s very important to me. This is one of the key matches and the interest of the Serbian public is huge. I’m ready to play in Belgrade, and I don’t think this loss to Nadal will affect my form,” said Novak after the US Open final.

Novak pointed out that in the past eight months, he has been playing his best tennis now.

”I’ve played the best tennis now in certainly last seven, eight months, maybe the whole year. Wimbledon I played great, as well. So from Wimbledon up to this point, I feel much more comfortable on the court, more confident and getting this aggressive game back and the game that I need to have in order to stay at the top, and a game that has been a part of me always. It’s a good sign. I will continue on working, as I said, and hope that I can keep that performance,” concluded the best Serbian tennis player.