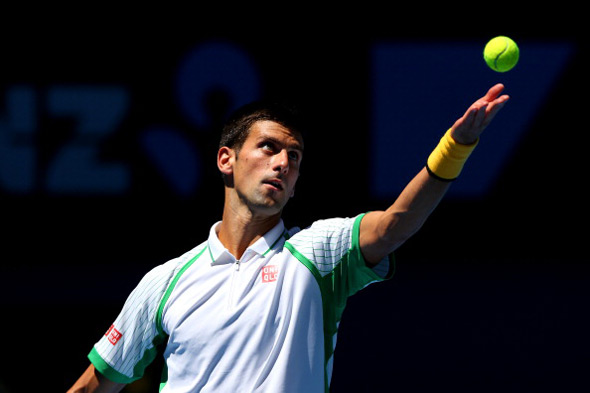 Two-time defending champion and world no.1 Novak Djokovic opened his Australian Open title campaign on Monday afternoon with a straight-set victory over no.60 ranked Paul-Henri Mathieu on Rod Laver Arena.

Djokovic opened with a break sealing it with a forehand return of serve winner. He broke for a second time in the fifth game and raced through another service hold with a backhand passing shot down the line to consolidate the double break. Novak fired down his second ace of the match to seal the first set at his first attempt, 6-2 in 31 minutes.

Another break of serve for Nole as he opened the second set in much the same way he finished the first. Novak found himself 0-40 down on serve in the second game but bounced back with three straight unreturnable serves and five points in a row to consolidate his early break. He took the set 6-4 in 33 minutes.

Nole got the break in the 11th game of the third set and served out the match 7-5, notching his fifth win in six meetings with Mathieu.

The top seed capitalised on 4 of his 7 break point chances, and saved all three break points he faced against the Frenchman.

“It was a good performance for a first round. I felt I was in control of the match in the opening two sets. Then, he started playing better, striking the ball quite well from both sides on the baseline. I thought he was serving really precisely and really well,” said Novak. “It was tough to break. But in the end, that 11th game, I made some good shots, good points, and managed to go through in straight sets.”

Djokovic has a 33-5 record at Melbourne Park and has reached the semi-finals or better at his past 10 major tournaments.

He is seeking to capture his fourth Australian Open crown in six years, having triumphed in 2008, 2011 and 2012, and biding to become the first man in the Open Era to win three straight titles at the event.

The 25-year-old Serbian star next meets world no. 62 Ryan Harrison who beat Santiago Giraldo of Columbia in four sets.