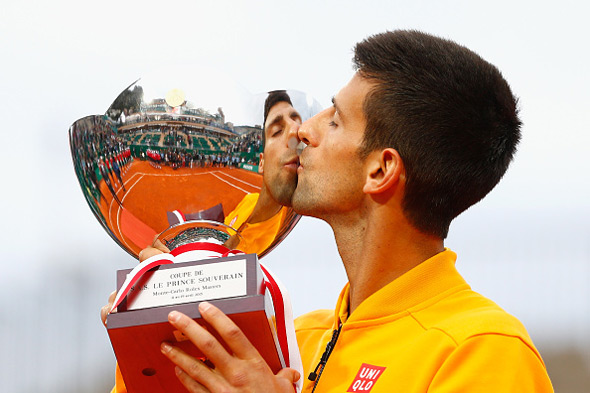 Novak is the 2015 Monte-Carlo Rolex Masters champion! The world no.1 claimed a piece of tennis history on Sunday at the Monte-Carlo Country Club.

With a 7-5, 4-6, 6-3 victory over sixth seed Tomas Berdych, the Serb captured a second crown in Monte-Carlo and became the first player ever to win the opening three ATP World Tour Masters 1000 events of a season.

Djokovic and Berdych met for the 21st time on the professional tour with Nole now enjoying a dominant 19-2 H2H series lead.

In windy and humid conditions, both players struggled with their serve and made more unforced errors than usual.

Novak suffered an early break in the opener, but fought back in the sixth game to level. The top seed failed to serve the set out after breaking the Czech again in the eighth game, but was successful at second attempt as he converted his third chance after 53 minutes.

The second set was interrupted at 3-2 by a 70-minute rain delay. After the skies cleared and play resumed, Berdych broke for a 4-3 lead and kept the advantage to force a decider.

Djokovic stormed to a 4-0 double break lead in the third set. The Czech broke back once, but the 2013 titlist closed out a hard-fought win after two hours and 42 minutes.

“I thought I won this match with my heart and with battle,“ Novak said. “I don’t think I played on the level I wish to play, but credit to Tomas. He played very aggressively, staying close to the line, pushing me back. So I had to defend. It was a battle, a real fight. I was trying to mentally stay tough and fight my way through because I didn’t feel the ball very well. I had to adjust my position and movement on the court several times. In the end, I’m sitting here with this trophy that is very special to me. This is what matters. Sometimes winning ugly is necessary. It’s been a remarkable start of the season for me, couldn’t ask for a better start of clay court season.”

The Serbian tennis star, who has spent 142 weeks at No.1, improved to 30-2 record on the season with other championship successes coming in Melbourne, Miami and Indian Wells.

Djokovic will next play at the Mutua Madrid Open (3-10 May), where he triumphed in 2011. Novak was forced to withdraw from the event last year due to a right arm injury.