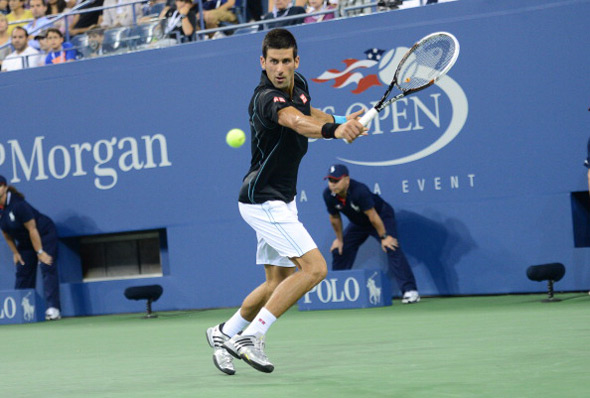 2011 US Open champion Novak Djokovic cruised into the fourth round of the final Major event of the season, crushing Portuguese Joao Sousa 6-0, 6-2, 6-2 under the lights of Arthur Ashe Stadium on Sunday.

The Serbian top seed looked very comfortable on the court. He needed one hour and 40 minutes to record the victory, staying on course for a possible semi-final clash against defending champion Andy Murray.

Novak dominated the 95th ranked Sousa, breaking him eight times from 13 opportunities, dropping serve once during the match.

The reigning world no.1 stormed through the opening set with a triple break in 28 minutes.

Novak continued the momentum into the second set, and with breaks in the fourth and eighth games, cemented his lead.

He raced to a 5-0 advantage in the third set and closed the match three games later.

“It’s definitely a unique experience, and NY has this unique vibe, especially in the night,” said Djokovic, on playing under the lights inside Arthur Ashe Stadium. “I’ve been working on basically every element in my game, so hopefully I can serve a little bit more efficiently and get some more free points on that in the next matches.”

Novak will play against world no.43 Marcel Granollers (1-0) on Tuesday. The Spaniard prevailed over no.109-ranked American Tim Smyczek in five sets.