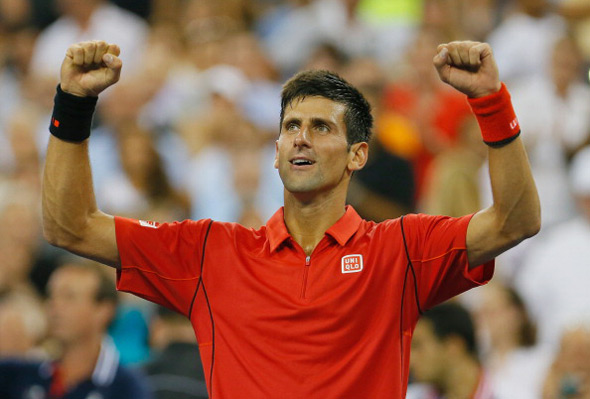 Top seed Novak Djokovic opened his US Open campaign on Tuesday evening with a commanding 6-1, 6-2, 6-2 win over Ricardas Berankis of Lithuania on Arthur Ashe Stadium.

The Serbian and world no.1 hit 28 winners to only nine unforced errors and broke serve seven times from 14 opportunities as he advanced to the second round in just 82 minutes.

The 2011 titlist landed 72% of his first serves and dropped serve once during the match.

“I was just very happy with the concentration because I didn’t play so well in Montreal and Cincinnati in the warmup tournaments for the US Open,” Novak said. “So I had 10 days to really give everything I can on the practice courts. I was very committed and put 100 per cent into my preparations. It’s starting to pay off. Of course, the first match was as well as it could be. Now I need to continue on working and stay on this course.”

With the victory over the former no.1 junior player, Nole claimed his 40th career match win (40-7) at Flushing Meadows.

Djokovic, who began the season with his third straight Australian Open title and sixth overall Grand Slam crown, goes on to face Benjamin Becker (87) on Friday.

The German upset no.45-ranked Lukas Rosol of the Czech Republic in four sets.

Novak beat Becker in their only previous meeting, at the 2008 Australian Open.