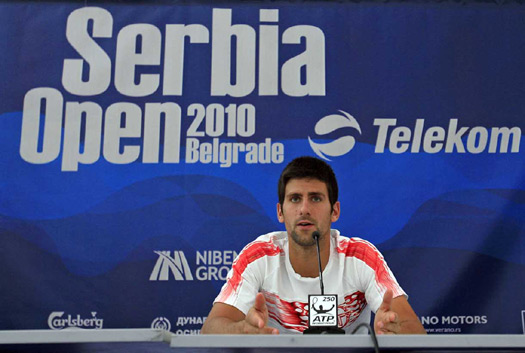 The best Serbian tennis player Novak Djokovic said today that he was extremely motivated to defend the title at the second ATP tournament “Serbia Open” in Belgrade (3-9 May).

”This tournament means a lot to me because I play in my country and my hometown,” said Djokovic, who has a first round BYE, so he will probably go on court on Wednesday.

The world no.2 said he was aware of the role of favorite on this tournament.

”I always give maximum, I’m not one of those players who can go on court and lose, even though they’re favorites,” said Djokovic at the press conference in “Milan Gale Muskatirovic” tennis complex.

Serbian no.1 has invited Belgrade audience to come to Dorcol and support home players.

”I’m hoping for a full stadium, not only on my matches, but also on matches of the rest of our players. This tournament makes me proud, because it shows the most beautiful face of Serbia to the world,” added Novak.

Top-seeded Djokovic expressed his hope that “Serbia Open” will attract the world’s top tennis players in the near future.

”The tournament is held between two ATP World Tour Masters events, and most of the players save their energy for Madrid and Roland Garros. That’s why it is difficult to attract ‘stronger’ names at the moment,” explained Djokovic.