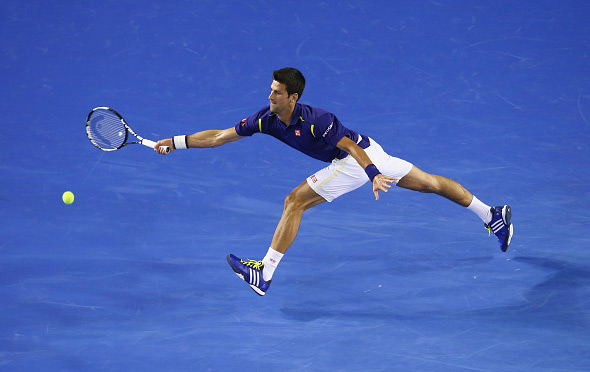 Facing Quentin Halys for the first time, no.1 seed Novak Djokovic scored a 6-1, 6-2, 7-6 (3) win over the Frenchman in one hour and 40 minutes to move into the third round at the Australian Open on Wednesday evening.

The five-time defending champion wasted little time, securing a quick two-sets-to-love lead with a double break in both first and second sets.

The 28-year-old Belgrade native suffered a break in the second game of the third set, but responded in the very next game and held to level. Djokovic went on to win a very entertaining affair on Rod Laver Arena, clinching a tie-breaker 7-3.

“I think I played a good match. Third set was a close set, a battle. Credit to him for fighting, for serving well,” Novak said. “We got to a tiebreak where I held my nerves and played a solid tennis. He’s a powerful player, big forehand. He’s being aggressive every time he had an opportunity. He was just firing shots from both corners, from back of the court. He deserved the credit and applause in the end of the match for a fight.”

Novak will next play no.28 seed Andreas Seppi who eliminated 69th-ranked Denis Kudla (USA). The world no.1 has a perfect 11-0 H2H record with the Italian.

Looking ahead to the Seppi clash, Novak said: “He won against Federer last year in third round. He played many times on big stadiums against top players, so I expect him to try his best to win. It’s going to be a tough one. I need to earn my points. I need to be ready for rallies. It’s going to be physical match. But the way I’ve been playing, I have a lot of faith and confidence in my game.”

Djokovic is bidding to equal Roy Emerson’s record of six Australian Open titles and become the 10th man in history to win six trophies at any Grand Slam event. The Serbian star first lifted the trophy at Melbourne Park in 2008 and returned victorious in 2011, 2012, 2013 and 2015.