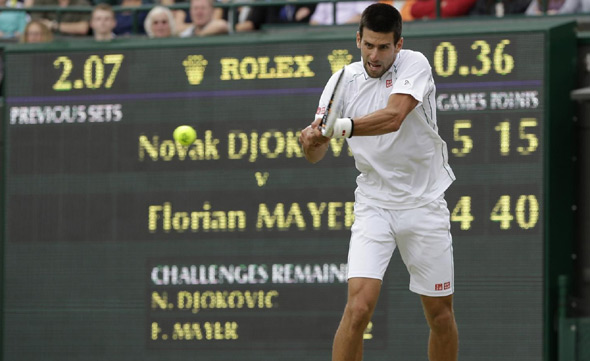 Great start for Nole at the 127th edition of The Championships.

The world no.1 opened his campaign for a second Wimbledon title on Tuesday at the All England Club with a 6-3, 7-5, 6-4 victory over 34th-ranked Florian Mayer.

He needed one hour and 56 minutes to beat the German for the second straight year in London, improving to a 34-5 record on the season. It was their fourth H2H meeting (4-0).

The second set went on serve until the 11th game when the top-seeded Serb broke his rival for the second time in the match. He closed it 7-5 to take a two sets to love lead.

A break in the opening game of the third set was enough for Novak to book his place in the second round of the only grass court Major event.

“It was a big pleasure again performing here on Centre Court in front of the packed crowd,” Djokovic said. “It was my first official match on grass this season and my first at Wimbledon, and I’m satisfied. It was tricky, Florian is a very good opponent with a good variety of shots. His game is well suited for grass. It took a lot of effort to come through. There are still a few things I would like to do better. I could serve better. But my game is there. I’m still trying to find my rhythm.”

The 2011 Wimbledon champion goes on to face American Bobby Reynolds (beat compatriot Steve Johnson) in the second round on Thursday.