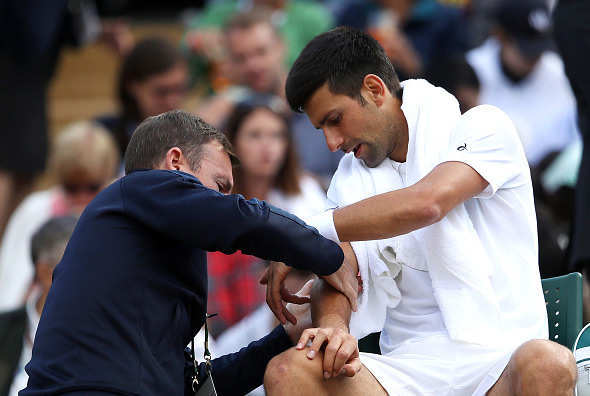 Second seed Novak Djokovic is out of Wimbledon as he retired injured during his quarterfinal match against Tomas Berdych while 6-7 (2), 0-2 down.

The three-time former titlist took a medical timeout and had a treatment on his right elbow after losing the first set tie-break. He decided he couldn’t continue with the Czech up 2-0 in the second set.

“It’s not the shoulder, it’s the elbow that keeps bothering me. For over a year and a half actually. It’s unfortunate I have to finish Wimbledon in this way. I was able for 30 minutes to play with some pain that was bearable. All the treatments and medication couldn’t help. The serves and forehands were where I could feel it the most and after that there was really no point,” Novak said at the post-match press conference. “I’m going to talk with specialists, as I’ve done in the last year or so, try to figure out what’s the best way to treat it and to solve it, to find a long-term solution,” he added.