Novak plays Nishikori in second round 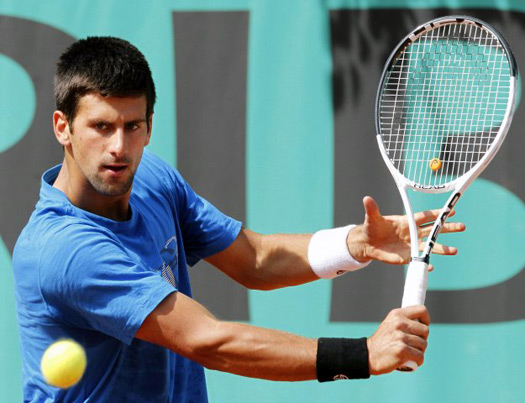 World no.3 Novak Djokovic is through to the second round of the second Grand Slam of the season-Roland Garros with a 6-1, 3-6, 6-1, 6-3 victory over world no.73 Evgeny Korolev of Kazakhstan in 2 hours and 8 minutes.

Novak cruised through the first set in just 27 minutes, breaking Korolev in the second and sixth game for 6-1.

The 23-year-old Belgrade native was the first to make a break in the third game of the second set, but Korolev fought back immediately to level the result and broke Djokovic’s serve once again in the eighth game for 5-3 lead. He took the set 6-3 in 44 minutes.

Nole found his rhythm again in the third set and with two breaks, in the second and fourth game, won it convincingly 6-1.

Third-seeded Serb broke Korolev’s serve again twice in the fourth set for 6-3 and first win at this year’s French Open.

“I haven’t played a real match since Rome this year, I think. I knew it’s gonna be a little bit different feeling stepping on the court and playing a match than practicing in last two weeks. I felt the ball really well in the practice. Right now I feel physically fit and ready to go the distance,” said Novak after the match. “I had ups and downs. I didn’t play a good second set, but, you know, I overcome it. I overcome it, I think. From the start of the third set I started playing better, started serving better. It’s important, you know. It’s going slowly, but I have to be positive about it.”

About tournament favorites and his expectations Nole said:

“Federer and Nadal are obviously the two best players in the world and two biggest favorites to win the title. But if I’m able to play my best and if I’m able to maintain that good level of the performance, I think I have a good chance to go far in the second week.”

Djokovic and Nishikori have never met before.