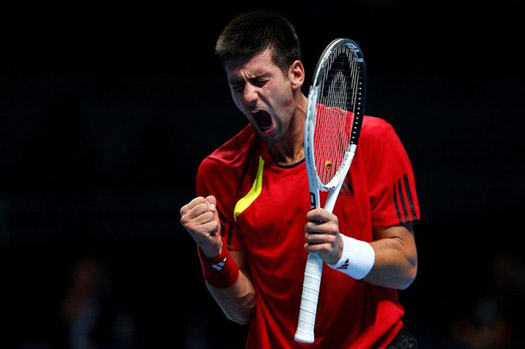 Third seed and defending champion Novak Djokovic made a winning start at the Barclays ATP World Tour Finals in London with a hard-fought 3-6, 6-4, 7-5 victory over no.6 seed Russian Nikolay Davydenko. The second Group B match at The O2 arena lasted 2 hours and 47 minutes.

Novak was broken to love in the fifth game of the opening set. He had two chances to level the score but failed to convert them. Davydenko made another break in the ninth game and took the set 6-3.

Djokovic earned a break point in the ninth game of the second set and got the break when Davydenko sent his forehand wide. The 22-year-old Serb faced scare serving for the set, but held to win it 6-4.

Nole broke his opponent’s service in the opening game of the third set and then held for 2-0 lead. He saved three break points in the sixth game and faced two more serving for the match at 5-4. The Russian capitalised on his second chance and leveled the result to 5-5. Djokovic took the lead once again with a break to love in the eleventh game and then closed the set and match 7-5.

”I wasn’t feeling that great on the court,” confessed Djokovic. “Physically wise, I was a bit slow, kind of couldn’t get in great rhythm. With reactions, as well. But I’m just happy to win the first match. I knew that it’s going to be long one. Davydenko is in great form, [a] very aggressive player. But in the end, [I am] quite happy to get through.”

”I really think he was a better player in the first two sets and maybe overall in the whole match,” admitted Djokovic. “But when you have bad days, you still manage find a way to win. I think that’s something that is great to have in your game.”

Novak’s next opponent in Group B is Robin Soderling. The match is scheduled on Wednesday at 15.15 CET.

Djokovic won all five encounters with the Swede. They last played in Paris Masters quarter-finals, Nole won in three sets 6-4, 1-6, 6-3.

Djokovic gets 200 ATP points for his first win in the round-robin stage.