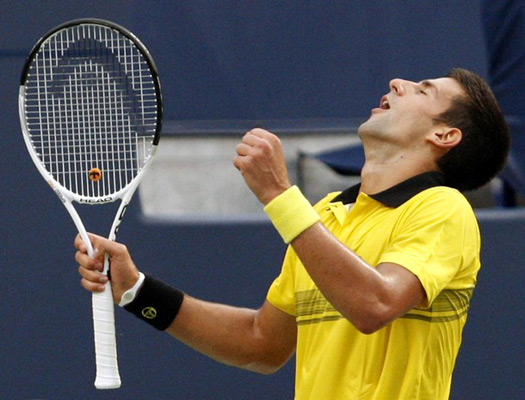 Novak Djokovic advanced into the quarter-finals at the Western & Southern Financial Group Masters in Cincinnati with a 6-1, 7-6(7) win over Argentine David Nalbandian in 1 hour and 37 minutes.

Nalbandian failed to capitalise on a break point when he sent a forehand return of serve wide across court and Djokovic went on to hold for the opening game of the match when the Argentine hit a backhand return into the net. The no.2 seed then broke his opponent’s service twice for 4-0 lead. Nalbandian broke back once, but Nole made the third break in the match and served out the first set 6-1 in 30 minutes.

World no.37 made an early break in the second game of the second set. Novak fought back for 2-1 and we saw two more breaks when the Serb finally held to level the result to 3-3. The 23-year-old Belgrade native saved a break point in the eighth game and two break/set point chances in the tenth to send the set to a tie-breaker where he saved three more set points and won it 9-7 when Nalbandian made a double fault.

“I have been very successful in United States hard courts. I won both Indian Wells, Miami, and won Montreal. This is where I haven’t won, so to complete that, I will try to win the title this year. But it’s still a long way,” said Djokovic after the match. “I was really happy with today’s performance. I think it was better than yesterday. David is a great player; plays very fast. And considering the conditions, which are very fast here as well, it was not easy to stay in the point with him.”

Novak will play against no.9 seed Andy Roddick in the quarter-finals on Friday at 8pm CET. The American beat fifth-seeded Robin Soderling of Sweden in three sets 6-4, 6-7(7), 7-6(5).

Djokovic and Roddick have met six times. The American, who won their last three matches, leads 4-2.