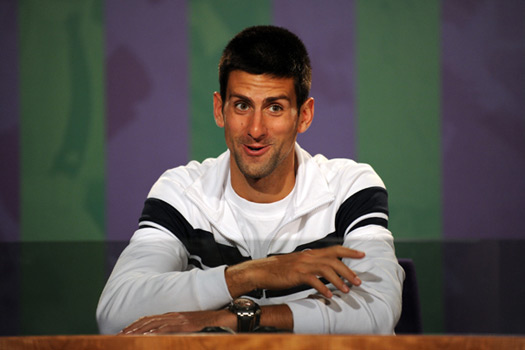 125th Wimbledon begins on Monday, June 20. Novak held his pre-tournament press conference on Saturday. He thinks Federer and Nadal are favourites to win the title.

“I guess you can always put Federer and Nadal in front of everybody else to win Wimbledon because they have been so successful on the grass courts in the past couple of years and they’ve been winning the past eight Wimbledons,” said Djokovic.

Novak has never won a title on grass, but the world no.2 believes he has his best chance of winning the Wimbledon title this season after a near-perfect six months. The Serbian, a two-time semi-finalist at the All England Club, opened 2011 with a 41-1 match record, with his only defeat coming in the Roland Garros semi-finals two weeks ago.

“I feel good physically and mentally,” said Nole who is in the bottom half of the draw with Federer. “I feel I have the strongest approach to Wimbledon that I ever had because of the confidence that I have, and because the last six months have been the best six months of my career.”

Here’s what one of the best tennis players in the history of the grand sport who won at the All England Club seven times, Pete Sampras, said in a telephone interview with ESPN.com:

“It’s incredible what he’s been able to do, be so consistent. Mentally he’s figured it out, really shown great improvement. I think now he has an aura about him. He’s turned into a great player.”

”If you look at the history of the game, when I broke through and started to dominate, and Roger, we were about 23. Novak won that early major in 2008; it takes you a few years to figure out how you need to play, who you’re playing against and to be really comfortable in your own skin, and I think Novak has turned the corner. With his game and athletic ability, I’m not surprised he’s right there. When you break down his game, he doesn’t have any holes.”