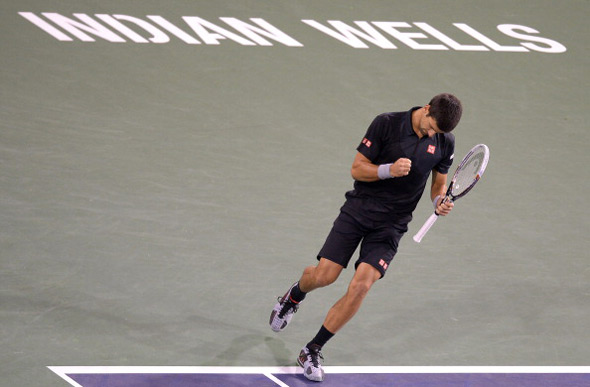 The 26-year-old Serbian star needed 68 minutes to advance into the ATP World Tour Masters 1000 event semi-finals for the sixth time.

Novak broke twice in each set for his sixth win in seven meetings with the Frenchman.

“I felt like I was very focused on the court from the start, and it’s what I was looking for,” the second seed said. “I played good tennis in the first few matches, but I had some ups and downs. Today was very stable from the first to the last point. He made a lot of unforced errors, and I just needed to make him play an extra shot and serve well. I have done everything I wanted.“

The 2008 and 2011 titlist landed 93% of his first serve points and didn’t face a single break point during the quarter-final encounter.

For the second time in three years, Novak will play John Isner in the last four at the Indian Wells Tennis Garden. The 12th-seeded American beat Ernests Gulbis 7-6, 7-6.

Djokovic boasts a 4-2 record against Isner, having won their last meeting in Paris last year.

Ahead of the next challenge, Novak said: “I played John here two years ago and I remember it was 7-6 in the third. He’s definitely not someone you like to play in heat with such serve. It’s very challenging because he doesn’t miss his serve too much, so you have to be able to hold your composure from the first to the last point and be ready to play three tie-breaks. The key is good return and efficient serving. Trying to stay tough and not let any concentration lapses, because he can use it.”

In the other semi-final, Roger Federer (SUI, 7) takes on Alexandr Dolgopolov (UKR, 28).