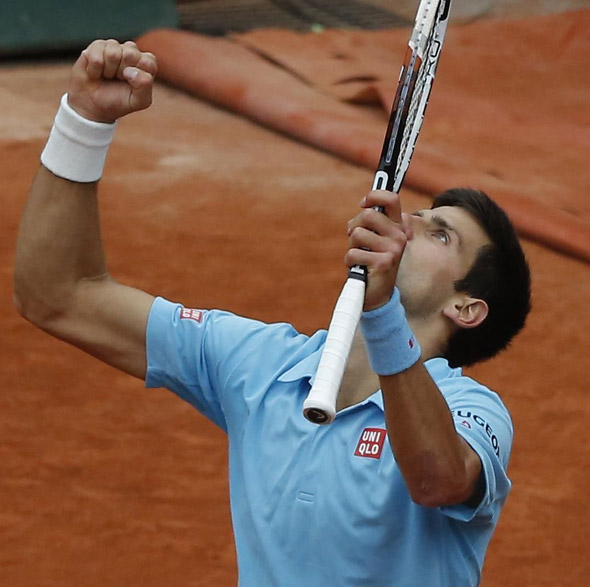 Nole is through to his second French Open final!

Second seed Novak Djokovic has put on another solid performance at the 2014 Roland Garros, beating no.18 seed Ernests Gulbis 6-3, 6-3, 3-6, 6-3 to progress to his second final in three years at the second Grand Slam event of the season.

The match on Court Philippe Chatrier was played in the hottest and driest conditions of the tournament so far. It lasted two hours and 34 minutes.

After saving two break points in the fourth game of the opening set, Novak broke his rival in the fifth and ninth games, going on to win it 6-3 in 41 minutes.

Games went on serve until the eighth game, when Djokovic went up a gear. He made a break and served out the second set 6-3.

Gulbis stepped up his game in the third set, while Novak suffered from a couple of lapses. The Belgrade native surrendered it 3-6, but didn’t let the setback affect him. He regrouped to take the fourth set and book a spot in his 13th Major final (6-6) overall.

“The first two sets were very good for me and then he started to play with fewer errors,” said Novak. “It was very difficult to maintain my concentration because the conditions were difficult for me, but I’m very happy to have made it into the final.”

Novak will look to win his first Coupe des Mousquetaires trophy on Sunday (15.00h), when he faces the eight-time champion and top seed Rafael Nadal. The Spaniard outplayed seventh-seeded Andy Murray 6-3, 6-2, 6-1 in one hour and 40 minutes.

Djokovic has a 19-22 career record against Nadal, having won their last four meetings. The most recent was in Rome Masters final three weeks ago – 4-6, 6-3, 6-3.

The 27-year-old Serbian star is one match win away from reclaiming no.1 in the ATP Rankings. Should he triumph in Sunday’s final, he would also become the eighth man in tennis history to complete a career Grand Slam.