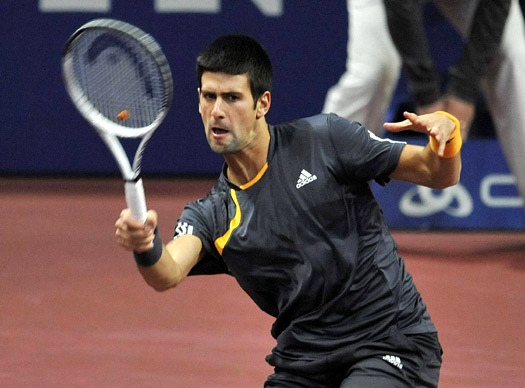 The best Serbian tennis player Novak Djokovic saved three match points and advanced to his ninth final in 2009 with a 6-7(4), 7-5, 6-2 victory over fifth seed Czech Radek Stepanek in 2 hours and 31 minutes at the Davidoff Swiss Indoors Basel tournament.

Djokovic saved a break point in the opening game of the match. The first set went to a tie-breaker, Stepanek made two minibreaks to Novak’s one and won it 7-4.

Second seed earned two break points in the fifth game of the second set, but the Czech held. Stepanek then failed to capitalise on his chance and Nole leveled to 3-3. The 22-year-old faced three match points serving at 4-5. He was down 0-40, but managed to win five points and stay in the match. No.5 seed couldn’t recover after missing that great opportunity to reach the finals. Djokovic broke his service in the eleventh game and took the set 7-5.

World no.3 was in total control of the third set. He made two breaks, in the first and seventh game for 6-2.

Djokovic will face three-time defending champion and world no.1 Roger Federer in attempt to win his fifteenth career title and fourth of the year. The Swiss defeated his countryman Marco Chiudinelli in straight sets 7-6(7), 6-3. Nole and Federer have met thirteen times, Roger leads 9-4.

Novak won his 70th match of the season and improved his ATP World Tour leading record to 70-18.

The final match in St.Jakobshalle is scheduled on Sunday at 3.15pm CET.