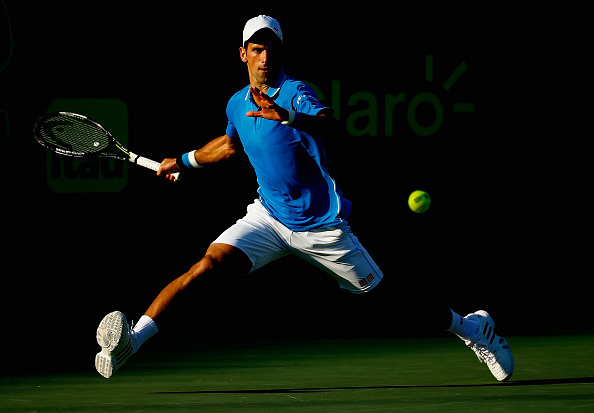 Defending champion Novak Djokovic is one match win away from reaching the final of the Miami Open presented by Itaú for the sixth time.

The world no.1 and top seed defeated sixth-seeded David Ferrer 7-5, 7-5 on Thursday night for a place in the semi-finals.

Ferrer raced out to an early lead in the match, but Novak quickly found his rhythm. He broke back in the seventh game and once again in the 11th, clinching the opening set 7-5.

In the second set, Djokovic broke first and held for 3-1 lead. He was serving for the match at 5-4, when the Spaniard saved one match point and levelled at 5-all. However, Nole earned new break point chances in the 11th game and was successful closing out the contest on second attempt after one hour and 53 minutes of play.

The 27-year-old, biding for his third title of the year, holds a 34-5 event record at Crandon Park. With the win over Ferrer, Novak reached his 45th ATP World Tour Masters 1000 semi-final and improved his Head2Head record with David to 14-5.

“He started off very well, didn’t make too many mistakes,” Djokovic said. “I had to fight for everything that I got tonight on the court. He’s a great competitor, he grinds a lot, runs and makes you play an extra shot. Even down in the first set, I knew I’d have my chances. I stayed mentally committed, felt better than last match.”

The four-time titlist leads his ATP H2H series with the American 6-2. Their last meeting was in the fourth round of Indian Wells, which the Serb won in straight sets.

Looking ahead to the Isner clash, Novak said: “I think he’s more confident coming into tomorrow’s match because he’s won against Top 10 players back-to-back. I’m sure that’s going to give him more of an advantage mentally. He’s going to try to be aggressive and take his chances… That’s what makes him very dangerous.”

Djokovic, who won the Miami Masters in 2007, 2011, 2012 and 2014, is looking to become the first player to complete the Indian Wells-Miami title sweep on three separate occasions.