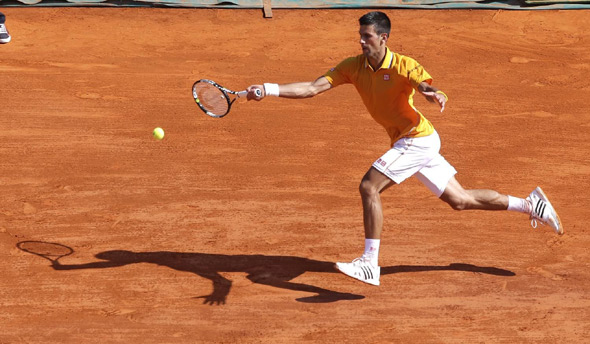 Top seed and defending champion Novak Djokovic made a start to his Internazionali BNL d’Italia campaign on Tuesday, beating Nicolas Almagro 6-1, 6-7 (5), 6-3 in second round action at Foro Italico in two hours and two minutes.

Novak raced through the opening set in 29 minutes, breaking twice for 6-1.

Games went with serve in the second set. Nole built a 5-2 lead in a tie-breaker, but Almagro made him work hard for the win. The Spaniard won five points in a row to force a decider.

A break in the eighth game of the third set was enough for the Belgrade native, who sealed his 150th clay-court victory and improved to a perfect 4-0 H2H record with Almagro.

“At the end of the day it’s a win after three weeks with no official match,” said Djokovic. “In the important moments today, I did feel a little bit uncomfortable. Maybe it’s due to a lack of competitive play in the past couple of weeks. But I won against a quality player, who knows how to play on the big stage. All in all, it was a great test. I was aware he was going to present a great challenge. Hopefully a day off will allow to spend some more time on the court, working to get better in the next one.”

The world no.1 won 78 per cent of his first-serve points and broke three times to advance into the last 16. He was 6/7 on net approaches.

Novak was playing his first match since lifting the trophy in Monte-Carlo last month, when he became the first player to win the opening three Masters 1000 events of the season.

The 27-year-old Serb, who claimed his 31st win in 2015, goes on to face Thomaz Bellucci on Thursday. The Brazilian qualifier upset Roberto Bautista Agut (ESP, 14).