Novak storms into the round of 16! 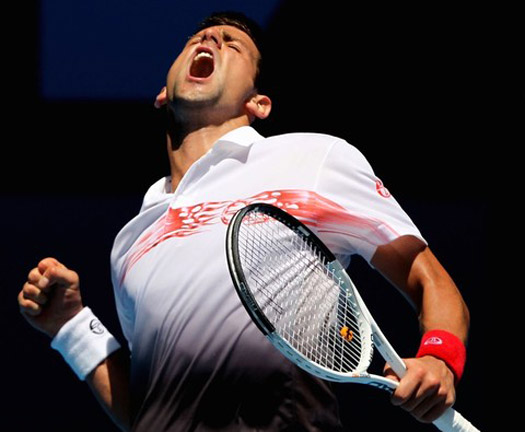 Third-seeded Novak Djokovic powered into the fourth round of Australian Open with a 6-1, 6-1, 6-2 victory over world no.103 Denis Istomin in just 97 minutes on Hisense Arena on Saturday.

The second set started in much the same way as the first. Novak made a break in the opening game and held his serve to consolidate his break. The Serb broke his opponent’s serve to love in the third game and soon had a 4-0 lead. Istomin won only one game again. Djokovic closed the set 6-1 breaking world no.103 for the third time.

Nole showed no mercy in this match. With two breaks of service and a hold to 15 he was 5-0 up in the third set moving to within a game of sealing the match in straight sets. The 22-year-old was broken serving for the match at 5-1, but broke back in the next game to win the set and match 6-2.

Djokovic capitalised on 9 of his 14 chances for break, while Istomin converted 2 of his 9 break points.

“I don’t think my opponent played on the level that he could. He was helping me out with a lot of unforced errors, and basically we didn’t have a lot of long rallies”, said Nole after the match.

”I just needed to be consistent and try to maintain the focus and get it over with as soon as possible. So that’s what I did.”

Novak will play against world no.86 Poland’s Lucasz Kubot for a place in the quartefinals.

Kubot reached the fourth round of a Grand Slam for the first time after no.20 seed Russian Mikhail Youzhny withdrew with a wrist injury. Djokovic and Kubot met last year in the final of Serbia Open tournament. Nole won the match 6-3 7-6(0).