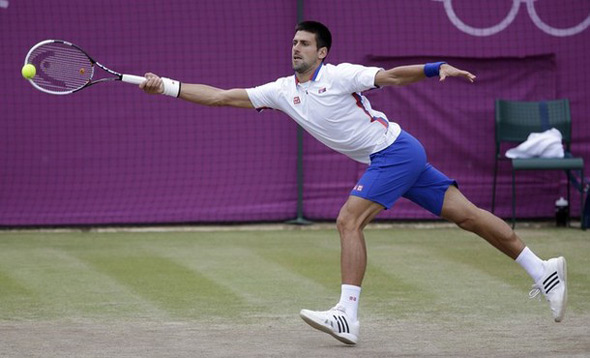 Nole didn’t repeat his result from the 2008 Beijing Olympics when he won a bronze medal for Serbia.

Match on Court One started 40 minutes later due to rain. At 3-2 in the opening set, Novak earned 3 break points, but del Potro came back from 0-40 with powerful serves to advantage when the rain interrupted play. After the match resumed, games were on serve until the 11th game when the Argentine used his chance to break. Nole had two break point opportunities to get back into the set, but del Potro held and took it 7-5 in 1 hour.

Djokovic saved two break points in the opening game of the second set, but Del Potro took control of the match by breaking in the third game. The 25-year-old Belgrade native was unable to convert a break point at 3-4 and the eighth-seeded Argentine won the bronze in his first appearance at an Olympic Games.

“He played better,” said Novak. “I had my chances, I didn’t use them and he deserved to win. It is a disappointing end, but I enjoyed it. It was a pleasure playing for my country.”

Novak is a top seed at Rogers Cup, an ATP World Tour Masters 1000 tournament taking place in Toronto next week.

The world no.2 is a defending champion.