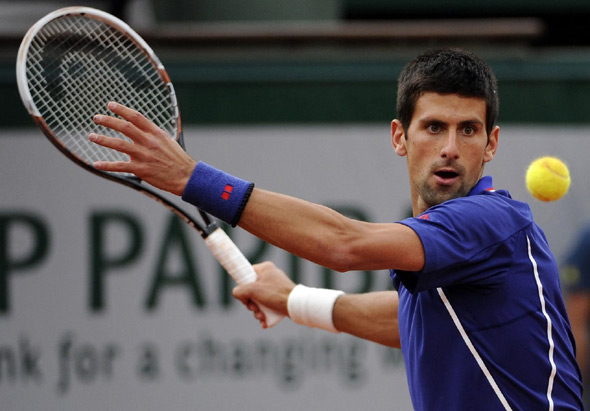 Roland Garros top seed Novak Djokovic continued his bid for a career Grand Slam with a fourth round win in Paris on Monday.

Nole regained control of the match after a slow start. He lost the opening set 4-6, but broke Kohlschreiber once in the second and third sets to move ahead.

The world no.1 broke his opponent’s serve twice in the fourth set for 5-2 lead. He missed his first match point in the next game when Philippe broke back, and one more in the 10th, before converting the third with a forehand winner for a place in the last eight.

Novak capitalised on four of his eight break point opportunities, improving to a 32-4 match record on the season.

”The conditions were really tough. He adjusted better. He started better, he was more aggressive, I couldnt really find the right rhythm on the court, but I believed that I could come back,“ Novak said. ”It was a tough challenge. He’s a specialist for clay. I needed to stay close to the line, because whenever I was back he was in control. I played well towards the end of the match and I’m happy to move on.”

In his 16th straight quarter-final at Major events, Novak will face another German, no.12 seed Tommy Haas, who ousted Russian Mikhail Youzhny 6-1, 6-1, 6-3.

Looking ahead to the Haas clash, Novak said: ”I lost to him in Miami. He played a great match. Tommy played an incredible fourth round today against Youzhny. I saw the first two sets. He was so impressive. He’s 35 years old, but the way he moves, the way he plays, looks like he’s 25. He is very confident. It’s a quarter-final of a Grand Slam, both of us can get a win.”