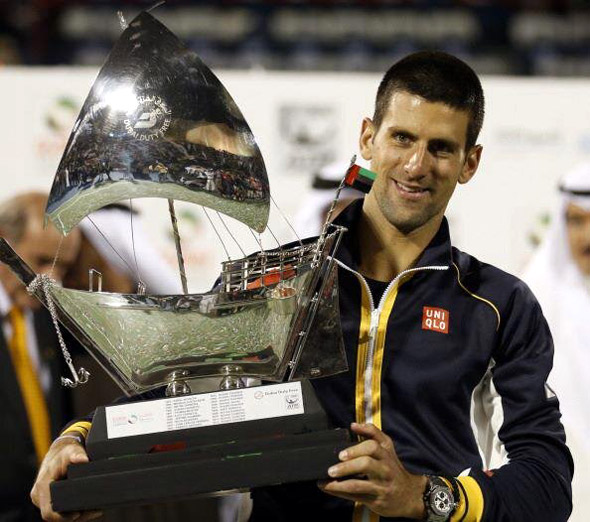 Nole is a champion of Dubai for the fourth time!

World no.1 Novak Djokovic captured his second title of the season with a 7-5, 6-3 victory over no.3 seed Czech Tomas Berdych in the final of the Dubai Duty Free Tennis Championships, an ATP World Tour 500 tournament, on Saturday.

The match lasted one hour and 34 minutes.

Novak suffered a loss of serve in the fifth game of the opening set and fell 4-2 behind, but quickly regrouped and fought back to level at 4-4. Berdych brought up three break points in the ninth game, but the six-time Grand Slam winner saved all three before consolidating the re-break for 5-4 lead. The Czech was under pressure in the 12th game. He double-faulted on a break/set point and Djokovic took the set 7-5 in 51 minutes.

The top-seeded Serbian star made a break in a lengthy eighth game of the second set and fended off a break point before wrapping up the match 6-3.

“It’s a thrilling feeling to prevail in the end in a great tournament like this,” Novak said at the trophy presentation. “Tomas is a fantastic player. It was very close today and could have gone either way. My serving was great, very high percentage of first serves, over 200Ks. I really felt that I could rely on my serve. And in tough moments, that part of my game actually helped me to prevail.”

“To be honest, I haven’t played as aggressive and maybe as good as I played in yesterday’s match or previous matches during this week. But, that’s also because I had a toughest challenge, obviously. I had Tomas who was aggressive from the start and feeling confident after a win against Roger. I was giving him too much time to control the points. That resulted with a break down, and then he missed a few easy shots on break points first and second set that gave me the victory basically. But I felt when I came from break down that I started believing in myself a little bit more. I hung in there and stayed tough.”

Nole converted three of four break points while the Czech capitalised on just one of his five break point opportunities.

The 25-year-old Belgrade native, who has a 13-0 match record on the season, extended his winning streak to 18 matches, which also includes last year’s Barclays ATP World Tour Finals and the 2013 Australian Open.

Novak next heads to the USA for the first two ATP World Tour Masters 1000 events in 2013, the BNP Paribas Open in Indian Wells and the Sony Open Tennis in Miami.

Before that, Nole will take part in LA Tennis Challenge charity event on March 4, where he will team with his childhood idol, the 14-time Grand Slam champion Pete Sampras, to play Bob and Mike Bryan. He will also play against former world top 10 player Mardy Fish in a singles match.