Novak was the special guest of Dnevnik on RTS! 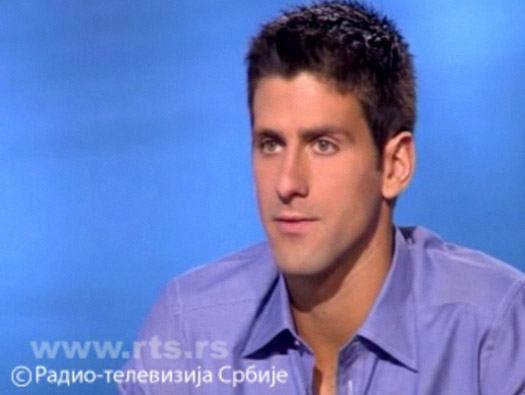 14. 07. 2009. · After the closing ceremony at the Universiade where Nole was a surprise, the star of the evening was invited to be a guest in one of the most followed news programs in Serbia, Dnevnik on RTS! He was answering questions related to the Universiade, missed opportunities at Wimbledon, the way he spends time on holiday and what follows in this tennis season.

At the beginning of the conversation the host Vladimir Jelic asked him about his impressions from the event, the closing ceremony of the Universiade, and how long he plans to stay in Belgrade.

‘Unfortunately, I didn’t have the opportunity to be at the opening ceremony of the Universiade, and to follow the event, but I had the great honor and pleasure to attend the closing ceremony, and I really have only words of praise and have the most beautiful impressions of that one night. I can only imagine, our guests who were participants and others who came to follow the whole sports competition. This is a great triumph of Serbia, a great thing, a big plus, in general, the image that is sent is a fantastic.’

‘I used the opportunity to come to Belgrade for two-three days to spend some time with my loved ones. My holiday is close to its end, and at the end of the week the preparations for the rest of the season begin,’ said Nole.

The host put a special emphasis on the past Wimbledon, aware of Novak’s potential, if he could have achieved more at the tournament because his form rising from match to match was evident.

The young Belgrade native explained that in the match against Haas he didn’t perform even 50% of the game he can play, but it is one tournament, he emphasises the necessity of leaving it behind and moving forward, as a professional. He looks on the bright side because he’s only 22. He has a lot of time and chance to play better and make greater achievement at Wimbledon in future.

The next question was related to the beginning of the crisis in the world of tennis, the specific analysis of the factors that more and more appear in the press and mass media. The case of Ana and Jelena was also mentioned.

‘The crisis is an integral part of every professional athlete, not only athletes and tennis players, but all the people who live on this planet. Everyone goes through it in their own way, but it is not important how many times you fall, but how many times you stand up.’

Novak mentioned the schedule of tournaments, which is ‘overcrowded’ and difficult, tennis players almost every week travel to different continents and therefore can not stay fresh and give their maximum.


‘I think that we, the Serbs, are special people, when it comes to tennis. I don’t blame the people who require high performance, the continuity of our results, because we made the expansion of this sport a few years ago.’

The talk was continued with the questions related to the tournament in Madrid, surely the unforgettable match against Rafa, probably the turning point in the continuation of their careers. Nole thinks that Nadal now feels the bad side of all the physical efforts, that he’s having a hard time, and sincerely hopes that the Spaniard will return quickly to the court.

Novak used the moment to deny all the texts in the press about the possible dissension within his family and that others decide for him in his career.

‘The media is an integral part of every successful man, you have to deal with it, to accept as something that follows you. The more successful you are, the more attention you get. It helps the better sale of the papers and then they ‘dig’ deep to find something that may provoke you.’

‘I consider my family for the greatest value, we have a great love for one another, and we can only get out of this situation, to accept it as something that will strengthen us,’ said Nole.

Finally, Novak answered the question how he sees himself in the next two years, still at the top?

‘I really sincerely hope, my life goal is to be no.1 in the world, I’m trying to establish a balance and to be fresh for the new victories’, said Djokovic.

The talk can be found in the section ‘Emisije’ on RTS site.