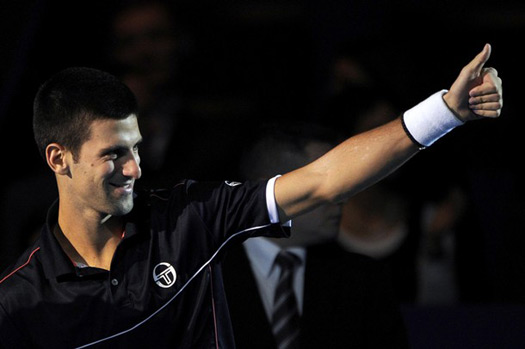 Nole is through to the quarter-finals of the ATP World Tour Masters 1000 tournament in Paris.

Novak improved to 10-1 against Troicki.

“I’m happy with the way things are going progress and game wise,” said Nole after the second win this week. “It’s only my second indoor event after December last year, so I’m still kind of getting used to the conditions. I’m taking one day at a time and I really enjoyed being successful this year – but it’s not over yet. London is the crown for all the achievements so hopefully I will be ok and ready to play there.”

The 2009 champion lost his opening service game. He broke back in the sixth game to level at 3-all, but got broken once again and Troicki took the set 6-4.

Djokovic had a 2-0 lead at the beginning of the second set, but the world no.19 fought back to equalise the result. Novak survived a 10-minute fifth game scare, fought off three break points and held. He made a break in the sixth game which was enough to win the set 6-3.

Nole was dominant in the rest of the all-Serbian third round encounter. He raced to a 4-0 lead and clinched the final set and match 6-1.

Next up for Novak is no.6 seed Jo-Wilfried Tsonga. The Frenchman beat Italian qualifier Andreas Seppi 6-3, 6-4.

Tsonga leads their H2H 5-4, but Nole won their last two meetings, in Wimbledon and Montreal this year.

“Jo is one of the home favourites and one of the crowd favourites,” said Novak about his quarter-final rival. “He is a great player, has a very powerful serve, and he kind of performs with as much as energy he gets from the crowd.”

The 24-year-old Belgrade native is looking to win his second title in his seventh appearance in Paris.