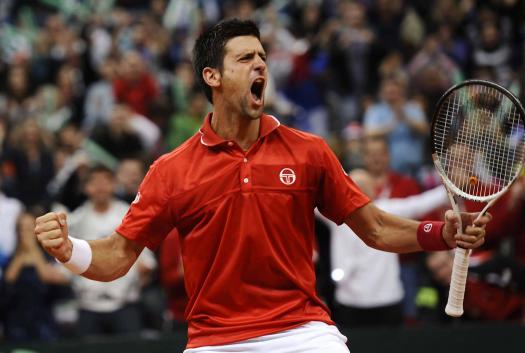 Novak Djokovic thrilled more than 15000 fans in Belgrade Arena when he brought the third point to Serbia against USA in their Davis Cup by BNP Paribas first round tie. He clinched a 7-5, 3-6, 6-3, 6-7(6), 6-4 victory over world no.20 John Isner in 4 hours and 15 minutes to hand his country a place in the quarterfinals for the first time in its history!

There were no chances for break in the first five games of the opening set. Djokovic earned one in the sixth game, but failed to convert it. He had two break/set points in the tenth game, but Isner held with fantastic services. Nole broke his opponent’s service in the 12th game to take the set 7-5 in 55 minutes.

The American was dominating in the second set. He won it 6-3 breaking Novak’s service twice, in the first and the last game.

World no.2 found his rhythm again in the third set. He broke Isner’s serve in the fifth and ninth game to seal it 6-3.

The fourth set went into a tiebreaker. Isner made two mini-breaks, one more than Djokovic, to take it 8-6.

Novak made a crucial break in the fifth game of the decisive final set. He failed to capitalise on three match points in the ninth game, but had no trouble serving it out for 6-4.

The quarter-final tie (09 Jul – 11 Jul 2010) will be the first meeting between Serbia and Croatia since the two countries became independent nations following the former Yugoslavia’s break-up.

The clash will probably take place in Croatia’s Adriatic resort of Split.