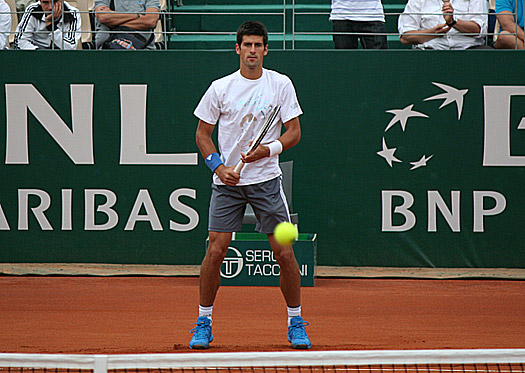 Defending champion and third-seeded Novak Djokovic is through to the third round of the ‘Internazionali BNL d’Italia’ tournament in Rome with a win over world no.33 Spaniard Albert Montanes in straight sets, 7-6(5) 6-0, in 1 hour and 38 minutes.

Djokovic was broken in the third game, but he found his rhythm after that, broke his opponent’s service twice and held for 5-2 lead. Montanes raised the level of his game, and Nole made several unforced errors. He made his fourth double fault to give Montanes chance to come back into the set. The Spaniard equalised to 5-5 and even had a break point in the eleventh game, but Novak held, and the set went to a tie-breaker. Djokovic won it 7-5 after 1 hour and 12 minutes.

That tiebreak was crucial for the outcome of the match. Nole made three breaks in the second set to take it 6-0.