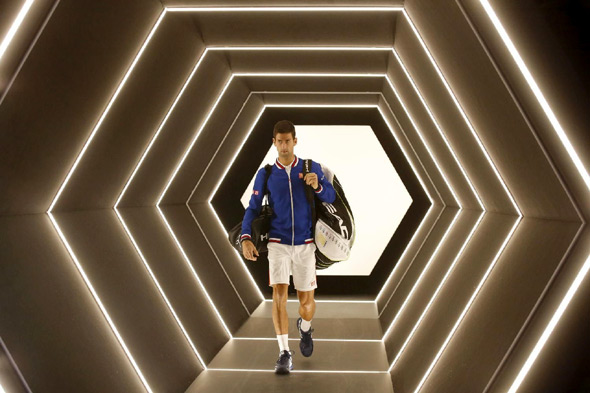 World no.1 Novak Djokovic is through to his 14th tour-level final of the season after another solid display in Paris which saw him defeat no.4 seed Stan Wawrinka 6-3, 3-6, 6-0 in the semi-finals of the BNP Paribas Masters on Saturday.

It is his 14th final in a row, which is an Open Era record. The Serb improved to 19-4 in ATP Head2Head series with the Swiss as he advanced in one hour and 50 minutes.

Nole has dropped just one set at the ninth and final ATP World Tour Masters 1000 event of the year, with victories over Thomaz Bellucci, Gilles Simon and Tomas Berdych also behind him this week.

“Credit to Stan for playing a great second set and coming back, winning five games in a row, obviously serving more accurately, playing more powerfully from the baseline, getting more balls back, and it worked for him. He played very well. But I still felt like I was hitting the ball well. With this kind of feeling and approach, I got to the third set and played the best set of the tournament so far,” said Novak.

Looking ahead to the Paris final with Andy, Nole said: “It’s always a special kind of challenge because we have the rivalry that goes back for a long time. We played just recently in Shanghai. I played one of my best matches against him. I hope I can play as well as I did there. But I’m sure that he’s going to try to do something different. He’s been playing some terrific tennis this week. It’s going to be a close one, it always is. It’s always very physical, also very psychologically demanding. We push each other to the limit, and I don’t expect anything less from that.”

Should the top seed defend the title in Paris-Bercy, he will become the first player to win six ATP Masters 1000 titles in a season and also claim a tournament record fourth trophy.