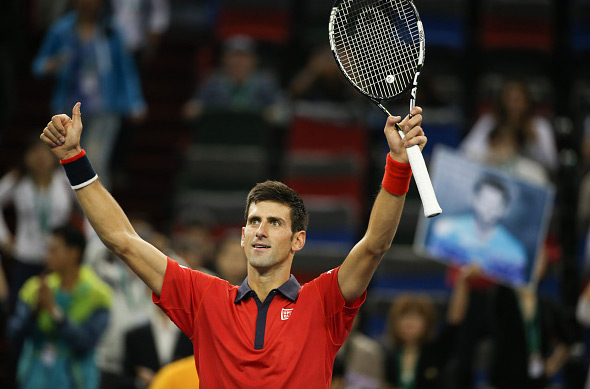 Two-time former champion Novak Djokovic remained on track for a ninth title of the season after a 7-6 (6), 6-1 victory against world no.20 Bernard Tomic at the Shanghai Rolex Masters on Friday.

Novak came up against his toughest test since the US Open. Tomic showed good resilience and great shot variety as he rallied from a 2-4 deficit in the first set to extend the top seed to a tie-break. The 22-year-old Australian saved two set points, but came up short on Nole’s third opportunity.

The 28-year-old Belgrade native raced through the second set with three breaks of serve. He converted his fourth match point and sealed the win in one hour and 27 minutes.

“It was a very good first set,” said the world no.1. “High quality tennis from both of us. Especially Bernard played some smart tennis, stepping in every shorter ball, serving very accurately. He pushed me. Went down to a couple points to decide the first set in the tie-break. It was a huge relief for me to win the first set, and started off the second with a break. That gave me more confidence. I think I played a very, very good second set.”

Djokovic leads Murray 19-9 in H2H meetings. He won eight of their last nine encounters, but Andy triumphed in the most recent one, in the Rogers Cup final.