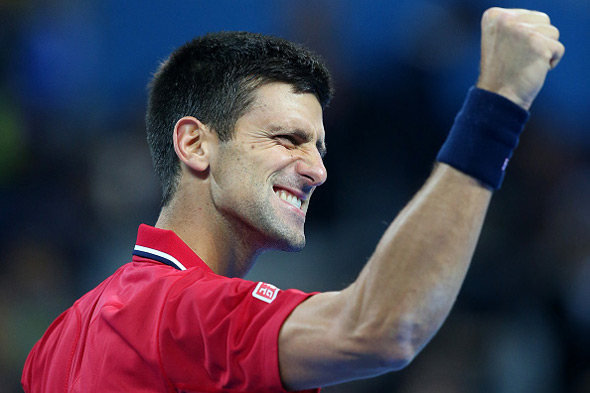 Nole is through to his fifth consecutive Shanghai Rolex Masters semis.

Defending champion Novak Djokovic continued his run at the ATP World Tour Masters 1000 event in Shanghai after dismissing no.5 seed David Ferrer 6-4, 6-2 on Friday to reach the semi-finals.

The top seed extended his winning streak in China to 28 matches with a win in one hour and 34 minutes.

Novak broke in the opening game of the match and consolidated it for 2-0 lead. He was 5-4 up serving for the set, but Ferrer put up resistance. It took 18 points to get the hold. Nole saved two break points before serving it out after 56 minutes of play.

Just as he did in the first set, the world no.1 broke in first game of the second set and then went up 2-0. This time, he managed to confirm his superiority with another break in the seventh game, and closed it out 6-2, improving to a 52-7 W/L record on the season.

“The 10th game of the first set was crucial,” said Novak. “It was crucial to serve it out. A huge relief because it was very physical, especially towards the end of the set. He started missing less, making some shots, so it made it a little bit more difficult. But I served well in important moments and second set was pretty good.”

It was the 19th career meeting between the two, with the Serb now leading the H2H 13-6.

Novak will next meet no.3 seed Roger Federer who beat Julien Benneteau 7-6, 6-0.

Looking ahead to Saturday’s clash, Novak said: “Roger is one of the best players ever in the game. He loves playing big matches. He knows how to play here. He also has big support. It’s just a big challenge. There is no clear favourite. I think every time we play each other, it’s a thriller. We need to bring our A game in order to win.”

The other semifinal will see Frenchman Gilles Simon take on Feliciano Lopez of Spain.