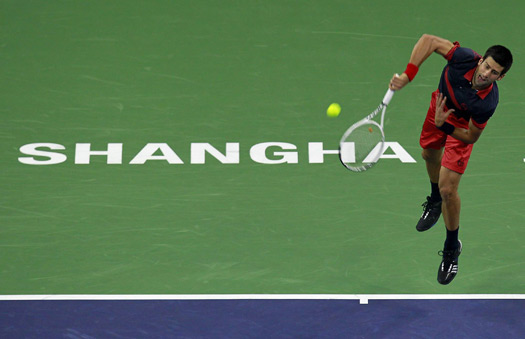 Second-seeded Novak Djokovic booked his place in the quarter-finals of the ATP World Tour Masters 1000 tournament in Shanghai with an easy 6-1, 6-1 victory over world no.31 Frenchman Richard Gasquet in just 58 minutes.

Novak played an impressive opening game. He broke Gasquet’s serve with a forehand winner and then held to consolidate the early break. The 23-year-old from Belgrade made two more breaks, in the fifth and seventh games, and took the set 6-1 in 23 minutes.

Djokovic continued his domination in the second set. Gasquet couldn’t find a solution for Nole’s superb performance. The best Serbian tennis player broke his opponent’s service twice and served out the set and match converting his first match point for 6-1.

“I was aggressive. I didn’t give him chance to come back to the match. I definitely played well in all elements in the game,” said Novak after the match.

Djokovic served 4 aces to Gasquet’s 3. Both players made 2 double faults.
Nole hit 25 winners to Gasquet’s 6, and made 18 unforced errors, 3 less than his opponent.
The Serb capitalised on 5 of his 9 break points, while the Frenchman failed to convert the only chance he had.

Novak will play against world no.35 Guillermo Garcia-Lopez for a place in the semi-finals of the Shanghai Rolex Masters. The Spaniard upset no.7 seed Czech Tomas Berdych 7-6(4), 6-3.

Djokovic and Garcia-Lopez have met three times, the world no.2 won all encounters. The last was in Dubai 2010, Novak won in straight sets 6-4, 6-4.