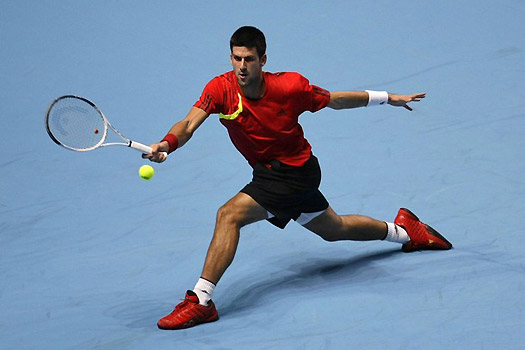 World no.3 Novak Djokovic lost to no.8 seed Swede Robin Soderling in straight sets 6-7(5), 1-6 at the Barclays ATP World Tour Finals in 1 hour and 34 minutes.

Nole had two break points in the third game of the day session Group B singles match, but failed to convert them. He was 0-40 down in the tenth game, but managed to save all three chances for break and held to equalise to 5-5. The set went to a tie-breaker, Soderling won it 7-5.

Djokovic took only the opening game of the second set, and lost all six til the end of the match. The Swede broke his service three times for 6-1.

Novak now has a 5-1 lifetime against Soderling.

Soderling has reached semi-finals with two straight-sets wins under his belt. He upset world no.2 Rafael Nadal in his first match in Group B. No.8 seed replaced injured Andy Roddick in in London.

Djokovic will play against no.2 seed Rafael Nadal on Friday. The Spaniard leads their head-to-heads 14-6. Nole won their last encounter in the Paris Masters semi-finals 6-2, 6-3.

Nikolay Davydenko defeated Rafael Nadal 6-1 7-6(4) in the night session singles match, ending the Spaniard’s chances of reaching the semi-finals. Both Novak and Davydenko are 1-1 in Group B so far.

Djokovic needs to beat Nadal and hope that Soderling will beat Davydenko. Only then he will reach the semi-finals.