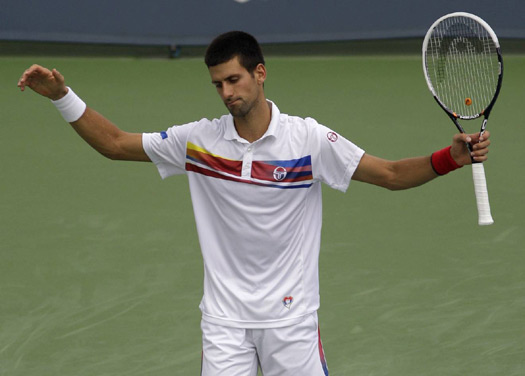 A sore shoulder forced world no.1 Novak Djokovic to retire in the second set on Sunday, giving fourth-seeded Andy Murray a 6-4, 3-0 win in the finals of the Western & Southern Open, an ATP World Tour Masters 1000 event.

Nole was off his game against Murray, who took advantage of it. The top-seeded Serb was broken in the opening game of the match. He fought back in the sixth game to level the score, but the Brit broke once again winning a fantastic 42-shots rally. It was the crucial moment for Andy to take the set in which Novak made 20 unforced errors.

The 24-year-old Belgrade native called the trainer and got his shoulder treated between the sets. It was obvious from the very first point that he was struggling with a shoulder injury.

Three games were played in the second set. Murray converted his chances in the first and third games for 3-0 lead when the world’s top ranked player decided to pull out.

“I just could not serve. I served an average 90 miles per hour the first serve, and I could not play forehands,” said Nole. “I could have maybe played another couple of games, but what for? I cannot beat a player like Murray today with one stroke. There is no good loss, that’s for sure. But the good thing is that there is a week, eight days before the start of the US Open. So I think that’s enough time for me to get ready.”

The Serbian star has been having a dream season, winning nine titles (including Grand Slams at the Australian Open and Wimbledon plus a record five ATP Masters 1000 titles in Indian Wells, Miami, Madrid, Rome and Montreal).

Attention now turns to US Open, the final Grand Slam tournament of the year, starting in little over a week, on Monday, August 29.

Nole, we wish you a full and speedy recovery!