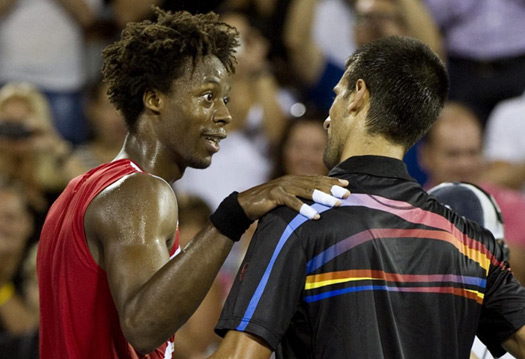 Nole is through to the Rogers Cup semi-finals with a fantastic 6-2, 6-1 victory over no.5 seed Frenchman Gael Monfils in just 73 minutes.

The 2011 Australian Open and Wimbledon champion has been continuing his amazing form in Montreal.

An imperious display by the top-seeded Serbian star who is 51-1 on the season with eight ATP World Tour titles.

Novak was on fire from 2-all in the opening set winning nine games in a row. He delighted the audience with brilliant, highly entertaining performance, wonderful ground strokes, powerful serve, great returns… Monfils took only one game in the second set, and Nole served out the match.

“I have played the best match of the tournament, no doubt. Everything was going well,” said Novak. “I had a difficult game on two-all to hold my serve. After that, when I made the first break, it was incredible. 9, 10 games in a row. I’m happy to see my game is progressing each day.”

It will be their ninth encounter, the Frenchman leads 5-3. Nole won their last match in Wimbledon semi-finals.

“The last match was very close, very intense, very important for both of us,” Djokovic said. “He’s been playing better in last couple of months. I think he increased his level. He’s and all around player. He can play pretty well on all surfaces. He has a big serve. If he serves well, he can beat anybody. He showed that in previous couple of tournaments. So it’s going to be tough one. It’s a fast surface. I need to return well and hope that I can get some chances.”