Nole blasts into last 16 in Paris 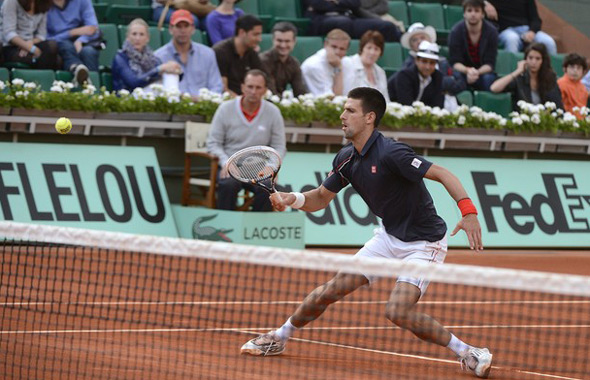 Top seed Novak Djokovic reached the Roland Garros fourth round on Friday evening with a crushing 6-1, 6-2, 6-2 victory over French qualifier Nicolas Devilder in 1 hour and 44 minutes.

“Last 15 minutes was very hard, but it was very important for me to finish the match today. I wouldn’t like to come back tomorrow and play a few games,“ said Novak, who had to wait for Wawrinka and Simon to finish their five-set battle.

Nole improved to a 33-5 season record after hitting 3 aces and 34 winners past the Frenchman in the pair’s first career meeting.

“He’s been in terrific form,” Nole said about his next opponent. “He’s in the best form I think in his life and he won  tournament in Belgrade. He made some really good wins, last one against Verdasco today. We all know the quality of Verdasco. So I will prepare for that match, as always, wanting to win.”

Djokovic, who has won the past three major championships and five overall, is bidding to win his first French Open title and become the first player to hold all four majors since Rod Laver in 1969. By winning the title in Paris, the 25-year-old Serbian would also become the eighth man to complete a career Grand Slam.