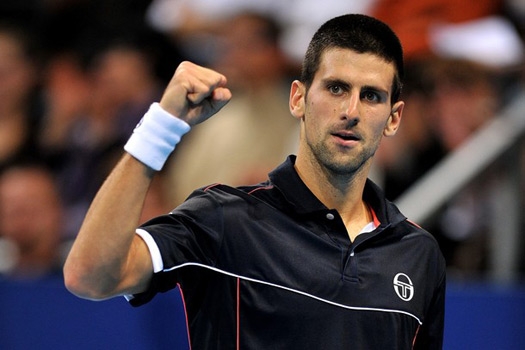 Top-seeded Novak Djokovic enjoyed a speedy win as he hammered Poland’s qualifier Lukasz Kubot 6-1, 6-2 in the second round of the Swiss Indoors Basel on Thursday.

Nole wrapped up the victory in just 55 minutes to improve to a 66-3 this season.

The 24-year-old Belgrade native breezed through the opening set. He broke Kubot’s serve in the second and sixth games and raced through a service hold to seal the set 6-1 in 26 minutes.

Nole continued the second set in the same rhythm. He capitalised on his break opportunities in the first and third games and served out the set and match 6-2.

“Today was a really comfortable match,” said the world number one. “I felt good on court. I’m happy to be playing better. This was the goal, I expected that I would struggle with rhythm after not playing for six weeks. But I have no complaints with my game. It was a good performance and I’ll try to do better tomorrow.”

”I’m not 100 percent and to be honest I don’t expect to get there this week, I would be surprised if I did. I only started serving a few days before my first match and I could tell I was lacking rhythm on second serve. But it was getting better today.”

The 2009 Basel winner will take on world no.59 Marcos Baghdatis in the quarter-finals of the ATP World Tour 500 event on Friday.