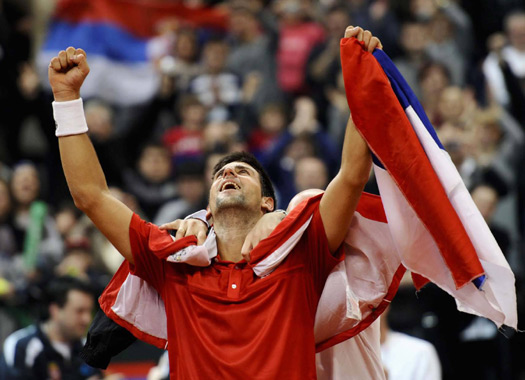 Serbia is at full strength with world no.2 Novak Djokovic leading the team. World no.37 Janko Tipsarevic, no.47 in the ATP Rankings Viktor Troicki and the third ranked doubles player in the world Nenad Zimonjic are also in the squad.

Czech’s captain Jaroslav Navratil has recalled the nation’s top two players, world no.7 Tomas Berdych and currently ranked no.35 Radek Stepanek. They both missed quarter-final tie against Chile due to injury. Navratil also named Ivo Minar and Jan Hajek to the team.

Djokovic has arrived in Belgrade today. He was present at the pre-draw press conference in Belgrade Arena.

Novak said he would play and help his team reach the final for the first time.

“I played a great tournament in New York, showed maybe my best tennis in the last 12 months. I need to be satisfied with the whole USA tour, I regained self-confidence and I am very happy about it,” said Djokovic.

“I’m a bit exhausted, but for the historic match like this, I can always find extra motivation and energy. I’m ready for the first matches on Friday,” concluded the US Open runner-up.