The stands in Benidorm blown away, no tennis on Friday! 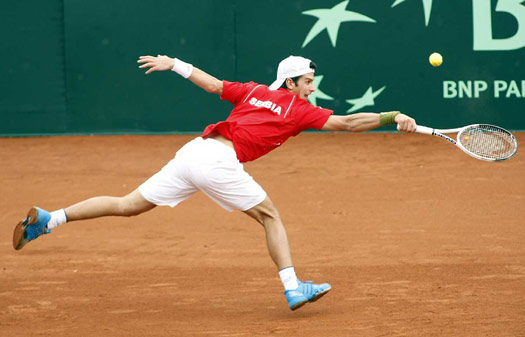 Start of the Davis Cup tie between Spain and Serbia has been cancelled for at least 24 hours. The decision was made during the night between Thursday and Friday, after heavy winds made the stadium in Benidorm unfit for use. The match referee Soeren Friemel has made the decision at midnight for reasons of safety, and informed both captains, Obradovic and Costa, that maybe they would not even be able to use training grounds for practicing on Friday.

- The opening day of the first round of the Davis Cup tie between Spain and Serbia has been suspended. Storm winds in the area affected one of the stands of the stadium. One of the structures (that has been made to accommodate 16,000 spectators) has suffered serious damage. All services are doing their best, trying to solve the problem. We will have a new meeting on Friday at 11am, and will consider the fate of the match. I informed both captains that the match start is delayed at least 24 hours, because even if we have the best weather conditions, I do not believe that the stadium can be brought to normal conditions for the game in less than eight hours of work.

- We’re spending more times at the meetings than with the players. Everything that has been happening around this match is unexpected. First we didn’t have enough training because of the weather conditions, and now the safety of audience and players is endangered not because of the courts but because of the stands, and the start of the match is delayed. Niki Pilic hasn’t experienced this in his career. We’ll see at the meeting whether we can use training grounds and share the additional terms with the Spaniards, and then try to find clay court somewhere near Benidorm, so we can work undisturbed. All this has been disrupting our preparation for the tie, but that’s tennis, that’s sport.