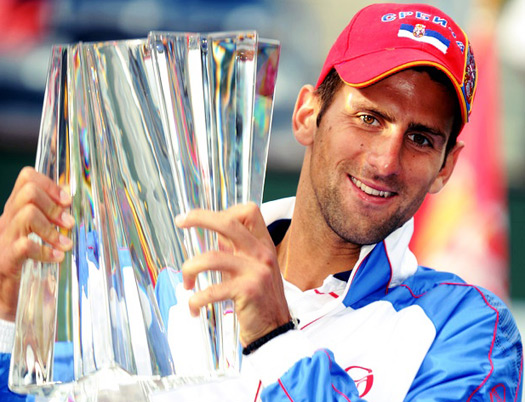 The best Serbian tennis player of all time, Novak Djokovic, came back from a set down to defeat top seeded Spaniard Rafael Nadal 4-6, 6-3, 6-2 in 2 hours and 25 minutes in a blockbuster final at the BNP Paribas Open on Sunday!

Novak won his twenty-first career title and third of the season, and extended his perfect record this year to 18-0 which adds further weight to the argument that our champion is currently the best player in the world!

This is Nole’s sixth ATP World Tour Masters 1000 title, and his second in Indian Wells (he beat Fish in 2008 finals).

Novak saved four break points in the fifth game of the first set, but Nadal converted his fifth opportunity when the Serb fired a forehand over the baseline. Two more breaks of serve followed and the Spaniard closed the set 6-4 in 48 minutes.

Something similar happened in the second set, only this time things went better for Djokovic. We saw three consecutive breaks of serve with Novak breaking Rafa twice, in the sixth and eighth games. He saved a break point and converted his sixth set point to take it 6-3 in 1 hour.

That was a huge confidence boost for Nole and he was soon 4-0 up with a double break in the decisive third set. Nadal couldn’t do much till the end of the match . Djokovic earned his first ever victory over the Spaniard in a final with two more comfortable holds of serve for 6-2.

“It was just the question of momentum,” said Novak after the match. “I managed to hold that very important game at 5-3 and then I was on a roll. I felt that this is the time when I had to use my opportunity and step in and be more aggressive and take it to him, and that’s what I did. Again, it was just a couple of points in the end of the second set that kind of turned the match around.”

“I am extremely happy with the way I’m playing and with the success that I’m having,” Novak told reporters after winning the Indian Wells tournament. “But I know that the season is very long, and I don’t want to be too euphoric about the win. I need to celebrate a little bit, and then move on. I have a big will to win each match I’m playing and I want to keep on going, keep on playing good tennis. Hopefully I can recover and get ready for Miami,” he said, referring to the ATP World Tour Masters 1000 event starting on Wednesday.

Djokovic has stayed undefeated this year proving he is a real threat for the world number one spot. He will move above Roger Federer into second place in the ATP Ranking list on Monday.