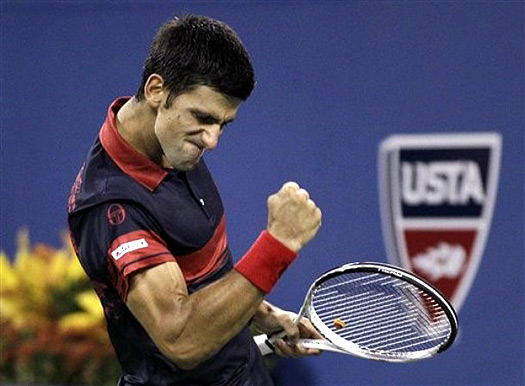 The best Serbian tennis player defeated world no.52 German Philipp Petzschner in straight sets 7-5, 6-3, 7-6(6) in 2 hours and 23 minutes to reach the US Open third round.

The last match of the day on Arthur Ashe was between Novak Djokovic and Germany’s Philipp Petzschner. Novak got things underway by serving first. He raced through his opening service game, holding with his first ace of the night. Petzschner also got his campaign off to a solid start with a hold to 15. The world no.3 earned a break point in the 12th game. The German hit a backhand long of the baseline to hand the first set to the Serb.

Djokovic got the second set underway firing an ace. The 23-year-old Belgrade native saved a break point in the fifth game when his opponent sent a forehand wide across court, and then earned two break points in the next. Novak missed the first, but got the advantage at the second attempt when Petzschner sent a forehand down the line wide. The Serb held to consolidate the break and later served out the set 6-3.

Nole faced a break point in the sixth game of the third set. The no.3 seed saved it with a forehand passing shot winner and went on to hold when the German dumped a forehand shot into the net. Djokovic broke Petzschner’s service in the seventh game, but his opponent fought back immediately to level the score. The set went into a tiebreaker. Novak used his third match point and won it 8-6 to book his place in the third round.

“It was very shaky at the end of the match, but I was very fortunate to hold on,” 2007 finalist admitted to the crowd after the match.

Djokovic served 4 aces to Petzschner’s 6, and made 8 double fault to his opponent’s 3.

Novak hit 29 winners to Petzschner’s 30 and made 26 unforced errors, 8 less than the German.

The Serb capitalised on 3 of his 11 chances for break, while Petzschner converted only one of 5 break points he had.

“James always plays well here. He’s been so many years on this level, winning against a lot of top players. He knows how it feels like to play on a big stage in important matches. He’s a very aggressive player, and I have no doubt that he’s going to have that mindset when we step on the court. He’s going to try to take the ball early, and I have to be ready for that,” said Novak about his next rival.

Djokovic defeated Blake in their only encounter two years ago at Beijing Olympics 6-3, 7-6(4)