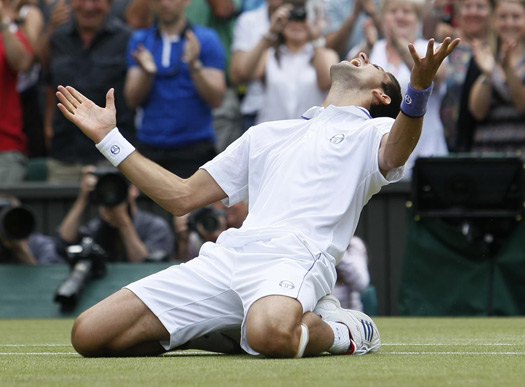 Thirteen days of unbelievable tennis at the All England Club are behind us.

Before Wimbledon, Nole had two goals. To make it into the finals and become the 25th player to reach no.1; and to win the title at the most prestigious tournament. He has realised his ambition with yesterdays’s fantastic semi-final victory over Jo-Wilfried Tsonga 3-1. Less than 24 hours is left till opportunity to realise his dream.

No.1 and no.2 seeds of the tournament, Rafa and Nole, are into the finals of the 125th Wimbledon after six wins in the main singles draw. They will face eachother in historic final on Sunday.

The finals of the third Grand Slam of the season will be the 28th match between the Serb and a year older Spaniard.

They’ve met twice on grass, Nadal was better both in Wimbledon 2007 semi-final and Queen’s 2008 final.

Nole will appear in his 39th career ATP-level final, seeking a 26th trophy. The 24-year-old Belgrade native is 7-0 in his 2011 finals, including a major title in Melbourne and big Masters wins in Indian Wells, Miami, Madrid and Rome. He also won Dubai and Belgrade. Rafa was victorious in Monte Carlo, Barcelona and Roland Garros.

The Serbian star will become the newly-crowned world no.1 on Monday, July 4, but the difference in points will depend on the outcome of Sunday’s grand finale.

If our wishes come true, the difference between Nole and Rafa can be 2, 015 points.

The blockbuster final is scheduled at 15.00 CET.