Wimbledon: Nole marches on to the last 8! 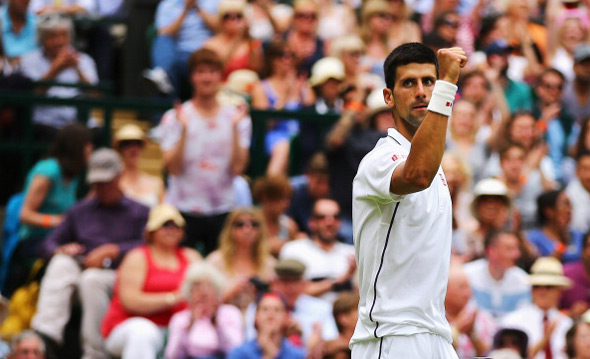 2011 Wimbledon champion Novak Djokovic advanced to the quarter-finals of The Championships for the sixth year in a row on Monday as he beat no.14 seed Jo-Wilfried Tsonga 6-3, 6-4, 7-6 (5) in one hour and 51 minutes under a closed Centre Court roof.

The top-seeded Serb broke once in each of the first two sets.

The only hint of trouble appeared when Novak faced two break points in the eighth game of the third set. He managed to hold and went on to win a tie-breaker 7-5.

“In the third set he started to serve very well, and it was hard to get the ball back into play,” the world no.2 said. “I saved a couple of break points, and at 6-5 I had an opportunity and I used it. It was a great match.”

Novak will face Croat Marin Cilic (26) on Wednesday for a place in the semi-finals.

On his quarter-final opponent who he leads 9-0 in the head to head, Djokovic said: “It plays maybe a little bit in my mental favour, but he is now working with Goran Ivanisevic and he has improved a lot, especially his serve which is important on this surface. He has beaten Tomas Berdych and Jeremy Chardy and he knows how to win on grass so it will be a tough one.”