Wimbledon: Nole through to QFs with a straight-sets win over Haas! 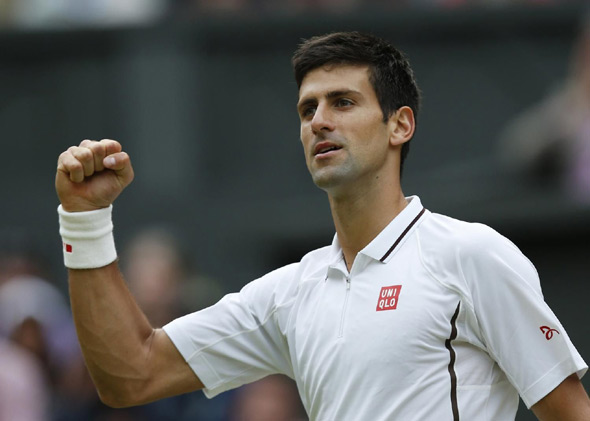 2013 Wimbledon top seed Novak Djokovic advanced to the quarter-finals of The Championships for the fifth straight year on Monday.

Nole had no trouble dispatching the player who eliminated him from the most prestigious tennis event four years ago.

He hasn’t dropped a set in four matches this year at the All England Club.

Novak performed at the highest level when he needed to. The Serb committed three unforced errors in the first set and broke his opponent’s serve three times, in the first, third and seventh games, for 6-1 in just 25 minutes.

Djokovic suffered a mini crisis in the second set, but quickly found his rhythm again. He rallied from a 2-4 deficit to take the set 6-4, winning four games in a row.

The 2011 titlist broke Haas in the sixth game of the third set and held for 5-2 lead. He was serving for match at 5-3, but the 35-year-old German battled back to force a tie-break. Nole opened it with an ace and went on to win it 7-4, converting his fourth match point.

“He’s always tough,” said Novak. “Coming into this match I knew I had a bad record against him on grass. He’s a grass specialist, he has great variety in game, comes to net. It was a tough challenge for me, but I played a really, really good match. I was serving well and returning exceptionally well in important moments. I had a minor setback at 5-3, serving for match. I’m really glad I closed it out in three sets.”

The reigning world no.1, who finished semi-finalist in London last year, has a 13-2 Head2Head record against his next rival, Tomas Berdych. The Czech won their last encounter, in Rome Masters quarter-finals, and also the 2010 Wimbledon semis.

Looking ahead to the last eight clash with Berdych, Novak said:

“I lost to him the only time we played on grass, in 2010. I think I am playing really good tennis at the moment. Maybe even better than 2011, when I won this event. I am confident on the court and trying to maintain this level. I hope I will succeed.”

The Gentlemen’s quarter-final line-up is complete:

All matches are scheduled on Wednesday, July 3.