Nole voted US Sports Academy’s 2014 Male Athlete of the Year! 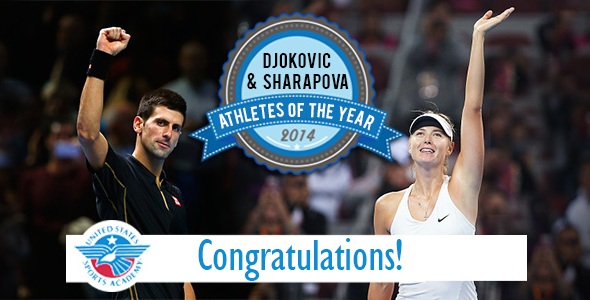 The world no.1 tennis player Novak Djokovic of Serbia and the WTA no.2 Maria Sharapova of Russia are the United States Sports Academy’s 2014 Male and Female Athletes of the Year.

These two celebrated tennis players were chosen by hundreds of thousands of sports fans worldwide in online balloting from Dec.1 to Dec.23. The 30th annual award was done in conjunction with NBC Sports.

This is the second year Novak has received the honour (also 2011). He won seven titles in 2014, including his second Wimbledon crown, four ATP Masters 1000 events (Indian Wells, Miami, Rome, Paris), one ATP 500 tournament (Beijing) and the season-ending ATP World Tour Finals in London. Nole played 69 matches (61-8 record) and finished the year as no.1 for the third time.