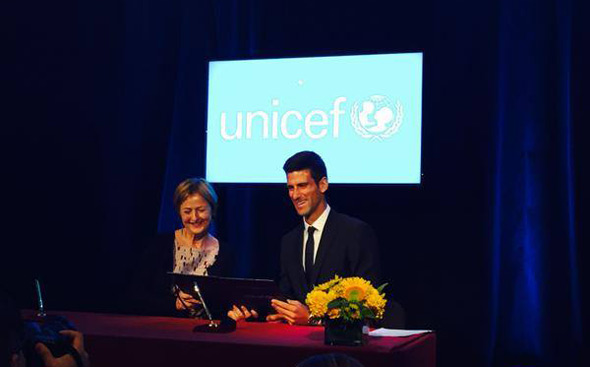 “Novak Djokovic is a true champion for children around the world,” said Ms Brandt. “He has shown that a powerful voice and powerful actions can make a difference for children, especially when they are very young.”

Novak first teamed up with UNICEF in 2011 when he was appointed a UNICEF Serbia Ambassador. Since then, he has been lending his support to improving the lives of children, especially those who are amongst the most marginalized, with a particular focus on the importance of early childhood education and development in providing children with the best start to life. It is in recognition of his deep commitment to children’s rights that UNICEF invited him to become a Goodwill Ambassador.

“I am honoured to have become a Goodwill Ambassador for UNICEF, and to continue to help defend and uphold children’s rights and provide access to early childhood care and development for every girl and every boy,” said Djokovic. “The early years of life are crucial. When well nurtured and cared for in their earliest years, children are more likely to survive, to grow in a healthy way, to have fewer illnesses, to develop thinking, language, emotional and social skills and become productive and successful citizens of society. I am committed to helping UNICEF provide quality early care and development to children, especially those who are most vulnerable, to help them build a brighter future for themselves, their families, and their communities.”

Novak has already made a positive difference in the lives of many children, not only as a powerful role model but also as a strong advocate for their rights.

In his role as a UNICEF Serbia Ambassador, he has visited preschools and kindergartens in Serbia to witness the importance of investing in learning at an early age. His support and that of the Novak Djokovic Foundation has helped create more flexible, high quality and inclusive pre-school education programmes for some of Serbia’s most vulnerable children.

Novak also signed today a Memorandum of Understanding between the World Bank and the Novak Djokovic Foundation, setting out how the two institutions can partner more closely to promote early childhood development. UNICEF and the Foundation have established a close cooperation on bringing early childhood services to every child and familiy in Serbia, and the welcome addition of the Bank’s resouces will allow an even broader reach to the most deprived children around the world.

The newly appointed Goodwill Ambassador is one of the most dominant players to ever set foot on a tennis court. To date, Novak has won a total of 54 career titles, including 9 Grand Slams, and he was a Medallist at the 2008 Summer Olympics in Beijing.