ATP World Tour Finals: Nole in Group A with Wawrinka, Berdych and Cilic 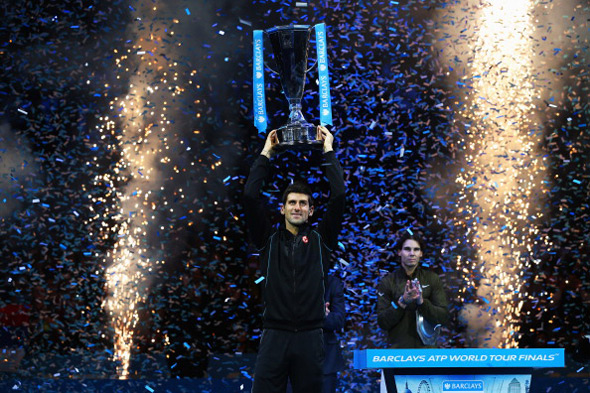 By winning his second Wimbledon title in July, Novak qualified for the Barclays ATP World Tour Finals for the eighth year in a row.

The world’s biggest indoor tournament begins on Sunday, November 9, at the O2 Arena in London, and will be played until November 16.

Novak is placed in Group A, with Stanislas Wawrinka, Tomas Berdych and first-time qualifier Marin Cilic.

The two-time defending champion and no.1 seed will open his campaign on Monday, November 10, at 20.00 local time (21.00 CET) against the US Open titlist Marin Cilic.

The winner of each group will be placed in separate semi-final brackets, with the top player in Group A playing the runner-up in Group B and vice versa.

The world no.1 won all five matches at the prestigious tournament last year. He beat Federer, Del Potro, Gasquet, Wawrinka and Nadal 6-3, 6-4 in the final, becoming the seventh player to win the World Tour Finals at least three times. He also won the title in 2008 (d. Davydenko in Shanghai) and 2012 (d. Federer in London).

Novak has 10,010 points in the latest ATP List, since the points from the Finals in London have been substracted. He needs to win three RR matches (or win two and reach the final) at this year’s season finale to avoid other calculations and secure the year-end no.1 spot.

The Belgrade native is spending his 119th week ranked no.1, which is seventh-most.