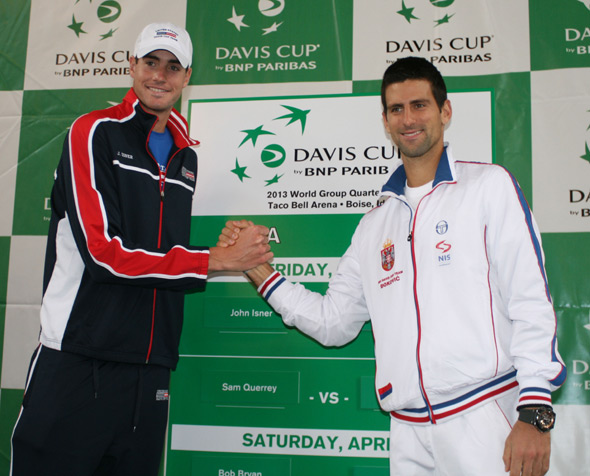 World no.1 Novak Djokovic will open Serbia’s bid for a place in September’s World Group semifinal, facing the USA’s no.2 John Isner in the first match of the Davis Cup by BNP Paribas quarterfinal tie in Boise, Idaho (5-7 April).

In Saturday’s doubles, Serbia’s Nenad Zimonjic and Ilija Bozoljac play against the most successful duo of all-time, Bob and Mike Bryan.

Novak will take on Querrey in the first of the reverse singles on Sunday, with Troicki closing against Isner.

“I think there is no clear favourite in this competition, especially in the latter stages like quarterfinals,” said Djokovic. “USA is always going to be a difficult opponent, especially if they choose conditions and location of play. We all know that John and Sam possess great serves, as well as Mike and Bob. On the other hand we have tall guys as well. It’s going to be an interesting tie. Hopefully we can get a win.”

The full draw is listed below:

Serbia and USA have met just once before, in Belgrade in 2010, and it was the hosts who prevailed in opening challenge of their campaign that brought them their first Davis Cup title.