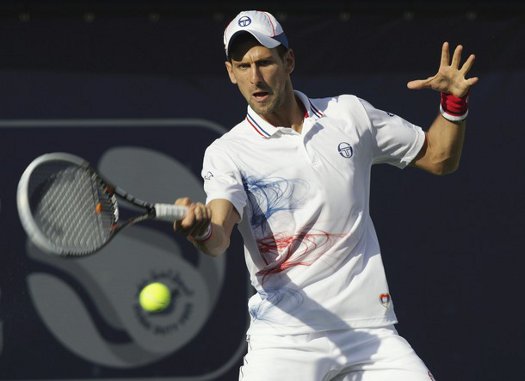 Nole continued his bid for a fourth consecutive Dubai Duty Free Tennis Championships trophy on Wednesday with a 7-6(5), 6-3 victory over Sergiy Stakhovsky.

The top-seeded triple Dubai champion took 1 hour and 29 minutes to beat the Ukrainian world no.74 in the second round of the ATP World Tour 500 event.

First set was closely contested, it went into a tie-breaker. Nole won it 7-5 in 55 minutes.

The world no.1 dropped his serve in the third game of the second set, but broke back in the sixth to level at 3-3. The 24-year-old Belgrade native broke his opponent’s serve once again and closed the set and match 6-3.

“I was expecting a lot serve and volley attacks, especially after first serve,” Djokovic said. “He was using it really well, making my return games very difficult. But we both controlled our service games quite well up to maybe the beginning of the second set. I had one bad service game; he had couple. I was fortunate to use the opportunity when it was presented.”

In the quarter-finals, Novak will face his friend and compatriot Janko Tipsarevic. The match is scheduled on Thursday.

“Janko’s very solid from the baseline. When he has time and he steps into the court, he’s very dangerous. I need to try to be aggressive. I need to try to stay close to the line. That’s all. He doesn’t have many weaknesses in his game.”