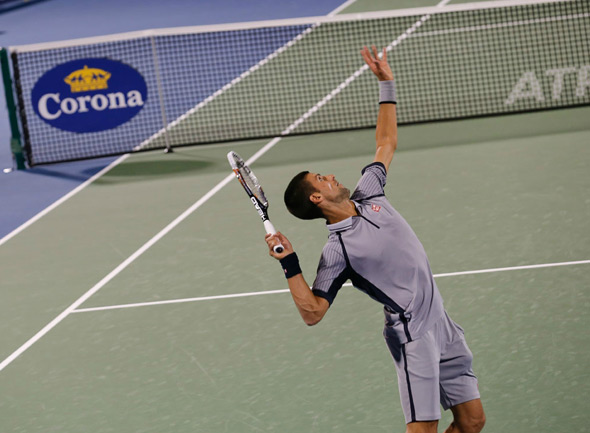 World no.1 Novak Djokovic outclassed no.7 seed Andreas Seppi    6-0, 6-3 in 65 minutes on Thursday at the Dubai Duty Free Tennis Championships to reach the semi-finals of the ATP World Tour 500 hard court event.

Nole saved a break point in his first service game, but was otherwise largely untroubled in dispatching the Italian. The Serbian top seed broke his rival three times to take the 25-minute opener 6-0.

A break in the fourth game of the second set was enough for the three-time former titlist to clinch a convincing straight sets victory, his 10th straight win over Seppi.

“Beginning of the second set was crucial. I saved some 15-30 game on my serve and managed to break him in the right moment,” said Novak. “It was overall a great performance from my side. He made a lot of unforced errors which helped me today.”

Djokovic won 89 per cent of his first service points and capitalised on four of his eight break point opportunities to record his 11th match win of the season.

The six-time Grand Slam champion, who will next meet Juan Martin Del Potro on Friday (about 17.00 local time / 14.00 CET), is looking to capture his 36th career title.

“Delpo is a very talented player, very powerful from both sides from baseline, great serve. Very tall, but moves around pretty well. He won a Grand Slam, he won many titles, he’s an established top 10 player…we know everything about each other, it’s gonna be a tough one, I need to be on top of my game,” Djokovic said of his next opponent.